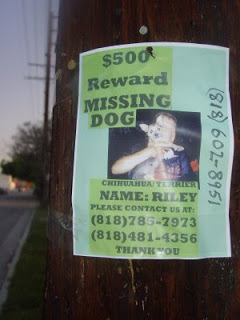 It’s been about two weeks since the posters went up. Some were green with Riley’s photo; some were plain with just the information that Riley was missed and a search was on.

Riley is a Chihuahua-terrier mix with upright ears. His wanted poster shows him in the arms of a smiling owner. There’s a reward offered — $500.

It’s not unusual to see such posters. A notice about a missing tabby cat on a street light pole. A poor black and white photocopy of an older dog who needs medications and has gone missing. Every once in awhile, a flier announces a found pet. The finders say they cannot keep the dog they found and will have to turn it over to the animal shelter if the owner doesn’t 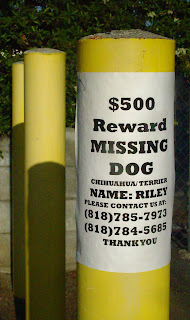 The posters stay up until they are faded by the sun and torn by the wind. I check them to be on the look out as Joey and I and the rest of our pack walk. Almost never is there a sign that announces the pet has been found.

I reach down to rub Joey’s velvet ears. He once was a stray on the streets, lost from his home by accident or choice. Shivering with cold, hunger and fear.