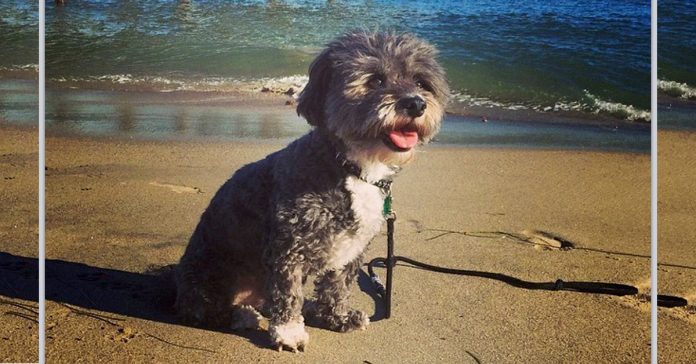 When he trots across the patio bricks and pauses to jump into his “mother’s” lap, you just want to reach for a Mojito and turn on some light Chachachá music.

Havanese: the national dog of Cuba

The ancestors of the dog we now know as the Havanese probably came from Tenerife, one of the Canary Islands, as pets of passengers bound for Cuba. Ancestors of the Havanese — the Bichon Tenerife and the Blanquito de la Habana (“little white dog of Cuba”), are both extinct.

These dogs have a silky, wavy, hypoallergenic double coat. Paddington is a beautiful ball-bearing gray, but Havanese also come in black, white, tobacco, Havana brown, fawn and mahogany. Small (nine to 16 pounds) and sturdy, they are bright, affectionate, playful and gentle. Good city dogs, Havanese are watchful but not prone to excessive barking.

Paddington, like other Havanese dogs, is a little longer than he is tall. His ears rest beside his face and his plume-like tail curls over the top of his back. Because his front legs are slightly shorter than his back ones, Paddington has a springy gait as he follows his favorite people around.

During the 1950s, when the Cuban revolution was happening, many Cubans fled to the U.S. But few were able to bring their dogs with them. When American breeders became interested in the breed in the 1970s, there were only 11 dogs available to breed. The American Kennel Club (AKC) didn’t recognize the breed until 1996.

Havanese rank as 24th most popular dog breed out of 193, according to the AKC.

Taking care of a Havanese

Regular grooming will keep a Havanese’s coat free of tangles. A “puppy cut,” where the fur is trimmed to one to two inches long, also helps avoid mats and tangles.  Havanese don’t shed, but their fur does grow fast. Regular visits to a groomer for a bath and a trim is a good idea. Havanese can be trimmed, have their fur left long or even corded like a Pulli.

They do tend to get tear stains from their eyes, which are more noticeable on white or light-colored dogs.

These are moderate energy dogs. They enjoy walks and playing with people. Like most small dogs, you need to watch that you don’t overtire them. Havanese are sociable dogs and don’t enjoy being left alone for hours at a time. They do best as indoor dogs.

They are bright and eager to please. Be positive with your training; these are sensitive dogs. Affectionate as they are, Havanese love attention.

Havanese don’t tend to have many health issues and usually live to 14 or 16 years.

The character of a Havanese

From keeping Paddington company on several occasions, I’ve learned that he’s a polite and companionable dog. But he’s deeply attached to his people, especially Sue, his mother. Just like any dog — or person, for that matter — personalities vary with the individual. Some Havanese can be velcro dogs, refusing to be separated from their favorite people.