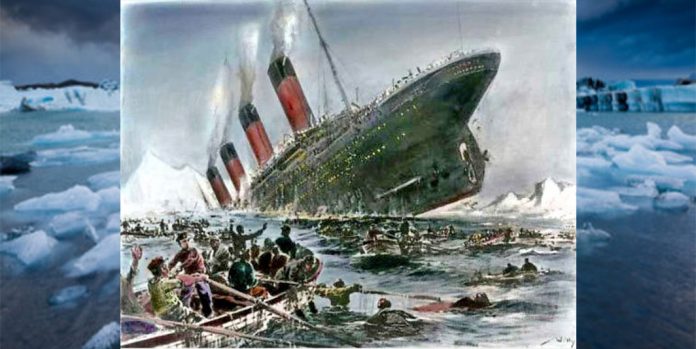 Sometime between 11:40 p.m., when the Titanic hit the iceberg, and when the ship broke in two and sank, someone freed the dogs in the kennels. Although there are many guesses who this was, there’s never been enough evidence to identify a person.

Much has been written about the people, the survivors and the victims. This post focuses on the dogs and their owners.

John Jacob Astor, 47, rankled society when he divorced his first wife Ava in 1909 and married 19-year-old Madeline Force in 1912. To escape attention, the Astors took an extended honeymoon to Paris and Egypt with Kitty.

They decided to return to New York when Mrs. Astor became pregnant. The Astors were among the wealthiest of the Titanic passengers.  Their $50,000 stateroom included working fireplaces and connecting servants quarters.

John and Madeline Astor, like many passengers, didn’t believe the ship was sinking. As the first class passengers gathered on the boat deck, the Astors put on life jackets. They waited on mechanical horses in the gym.

Astor helped his wife into Lifeboat 4, dangling six stories above the water. Because of her pregnancy, he asked Second Officer Charles Lightoller if he could go with her.  He was calm when Lightoller said no, women and children were to go in the boats first.  He threw his gloves to his wife, stood back and lit a cigarette.  Madeline Astor’s last saw him on deck with Kitty pacing nearby.

Days later, Astor’s crushed, sooty body was recovered from the open sea.  One of the ship’s smokestacks appeared to have fallen on him. He was identified by the labels in his clothing.  He had $2,500 in his pocket. Madeline Astor survived.  Their son, John Jacob Astor VI, was born Aug. 14, 1912.

Daniel jumped into the 31 degree water with father and son George and Harry Widener just before the ship went down.

He was one of the lucky ones; a plunge into freezing water can cause cardiac arrest. A person in water this cold can lose consciousness and drown in as little as 15 minutes. The Wideners died.

Daniel was picked up by Lifeboat 3. Daniel put in a $750 claim for his newly purchased champion French bulldog in a lawsuit after the disaster. He eventually became a member of the Virginia State Senate and died in 1940.

Henry Harper was the grandson of the founder of Harpers Brothers publishing house. He had taken time off from the family business to tour Europe and Asia with his wife. Ironically, in 1902, he had been on another ship that collided with an iceberg off the Grand Banks. The dog and the Harpers all survived in Lifeboat 3.

Bishop, 25, and his young pregnant bride, 19, were returning from a four-month honeymoon to Egypt, Italy, France and Algiers.  They delayed their departure to come home on the Titanic. Mrs. Bishop returned Frou Frou to their cabin when it was clear there wasn’t room in the lifeboats.  She recalled the dog grabbing the hem of her dress as if to hold her back.

The Titanic was the first of several tragedies for Helen. The child she was carrying when the ship sank died two days after birth on Dec. 8, 1912.  Dickinson endured rumors that he had dressed like a woman to get into a lifeboat.  In 1916, the Bishops had a car accident that severely fractured Helen’s skull and changed her personality.  The couple divorced and Helen died that year. In a final irony, Helen’s obituary appeared on the same page of the local newspaper as the announcement of Dickinson’s third marriage.

A Chow and Harry Anderson, 47

Anderson, a stock broker, put in a claim of $50 for the loss of his dog.  He later became commodore of the yacht division of the New York Atlantic Club and still later belonged to the Larchmont Yacht Club where fellow survivor Frederick Hoyt was also a member.

Two Dogs and the Carter Family

William E. Carter, 36, wife Lucile, 36, daughter Lucile, 14 and son William II were traveling with two dogs.  One was a King Charles Spaniel; the other of unknown breed.  Mrs. Carter and her children left on Lifeboat 4; Mr. Carter left on a collapsible boat. The family survived.  The dogs did not.

Lady, a Pomeranian, and Margaret Hays, 24

Both Lady and Margaret got on Lifeboat 7 and survived. Almost exactly a year later, Margaret Hays married Dr. Charles Easton. Lady died in 1921, was cremated and buried in an upstate New York pet cemetery. Mrs. Easton died of a heart attack on a cruise ship in Buenos Aires in 1956.

Dulles, an attorney, was traveling alone with the dog of unknown breed.  Both went down with the ship.

Among the legends of the Titanic is the story that Ann Isham refused to get into a lifeboat without her Great Dane. Two days after the sinking, passengers on the German liner Bremen reported seeing a woman in a life jacket floating in the water with her arms around a large dog. Ms. Isham’s body was never recovered. There is doubt about whether she even had a dog on the Titanic.

What is known is that her father had a law firm with Robert Todd Lincoln, son of President Abraham Lincoln, in Chicago. She moved to Europe in 1903 and lived with her sister Frances (Mrs Harry Shelton) in Paris. Ms. Isham boarded the Titanic in Cherbourg to spend the summer with her brother Edward in New York City.

Mrs. Rothschild and her dog were in Lifeboat 6 and survived.  This boat also carried the “unsinkable” Molly Brown, a Denver millionairess.  Mrs. Rothschild’s husband, Martin, went down with the ship. Her niece, Dorothy Rothschild, was the writer and poet later known as Dorothy Parker (1893-1967). The dog reportedly was attacked and killed by a larger dog weeks after surviving the Titanic. However, one of Mrs. Rothschild’s descendants said the dog was hit by a streetcar.  Mrs. Rothschild herself died in 1943.