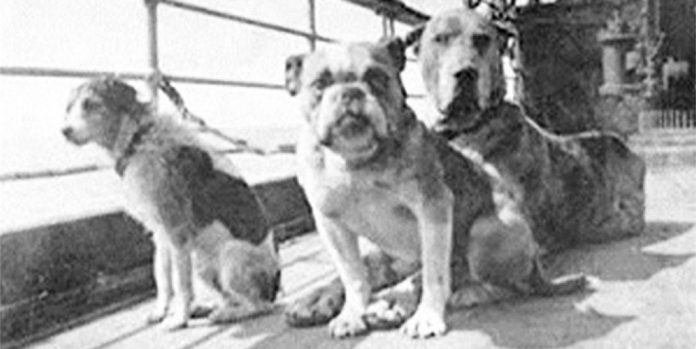 On a freezing Sunday night in the spring of 1912, the RMS Titanic sank in the north Atlantic on its first voyage. Along with the rich and famous, and the poor and helpful, there were nearly a dozen dogs on the Titanic.

Movies, books and articles focus on the 1,513 people who perished. (Only 32 percent of the 2, 224 passengers on the Titanic survived.)

Among those who died were millionaires John Jacob Astor IV, businessman Benjamin Guggenheim and Macy’s owner Isidor Straus and his wife Ida.

The dogs on the Titanic

But who would pay today’s equivalent of $50,000 if they couldn’t bring their dog along, too? No one. So naturally the Titanic had excellent kennel facilities. Dogs daily paraded down the deck in the company of a Titanic crew member. There were even plans for a dog show on Monday evening, April 15, 1912.

Information varies about how many dogs were on the Titanic, but estimates run 10 to 12, including a a champion French bulldog, a Pekingese, a chow, a King Charles Cavalier Spaniel, two Pomeranians, two Airedales, a Great Dane and three dogs of unknown breeds. Only three survived.

Freed from the kennels

Before the Titanic sank, an unidentified passenger went below and let the dogs out of the kennels. Frou Frou, a little dog owned by Helen Bishop, had been staying in her owner’s cabin. She was locked in when the ship sank.

Only the Pekingese and the Pomeranians survived. Elizabeth Barrett Rothschild carried her Pomeranian on Lifeboat 6. (This is the same lifeboat that saved Molly Brown.) Margaret Hayes, 24, traveling alone, tucked her Pomeranian, Lady, under her coat and boarded Lifeboat 7. Publishing scion Henry Sleeper Harper, 48, traveling with his Pekingese Sun Yat Sen, wife Myra, a manservant and an Egyptian dragoman, all escaped on Lifeboat 3.

The bond of human and dog

One of the poignant stories of the Titanic is that Ann Isham, 50, refused to get into a lifeboat without her Great Dane. Two days after the Titanic sank, passengers on the German liner Bremen spotted a woman floating in her life jacket with her arms wrapped around a large dog. The Encyclopedia Titanica states that there is no evidence to support this.

Another haunting story is that a black Newfoundland named Rigel saved the lives of Titanic passengers in a lifeboat by barking and getting the attention of a search ship. Supposedly the dog was swimming in the frigid waters searching for its owner, a crew member. The story was published in the New York Herald on April 21, 1912. No eyewitnesses ever confirmed that it happened.

True or not, it’s not hard for anyone who knows dogs to believe it.

As we pause tonight to remember the tragedy let us not forget the dogs of the Titanic.

If you would like to learn more about the dogs of the Titanic, check out these posts: