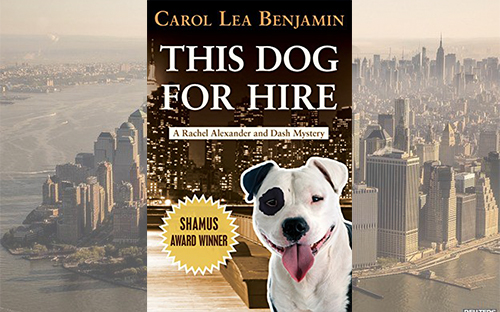 They are the perfect duo for Keaton’s assignment. As Rachel describes it, “Dash, my partner, is the real teeth in the operation.” Watching Dash track down a scent, Rachel picks up valuable clues. She can be a fearless detective with Dash’s protective presence at her back.

The case is already two weeks old when Rachel and Dash come on board. Cole was run down by a car in the early hours of the morning on a lonely pier. The person who found the body was a homeless man named Billy Pittsburgh, who vanished soon after his discovery.

Cole was getting ready for his first gallery show. His death has given the show valuable publicity and may well push up the prices on his work. His family is not helpful to the investigation. And, lastly, Magritte’s underhanded trainer, Morgan Gilmore, is murdered in the show ring while representing Magritte in a dog competition.

Rachel and Dash are great characters. You won’t find a coy, cozy mystery here where the dog is smarter than the humans or has cute dialog. Dash is a dog character who acts like a dog, albeit an exceptionally well trained one. He brings a dog’s unique skills of exceptional hearing, scent-tracking and ferociousness to the partnership.

Rachel horrified her mother and her sister by choosing to be a dog trainer first and then a private investigator. They think she should have been a nice doctor or lawyer — or at the very least married one or the other.

Author Carol Lea Benjamin brings two things to this book that few other authors can: she has been both a dog trainer and a detective. Her love and knowledge of dogs is clear in the relationship between Rachel and Dash and in Magritte the prize-winning basenji.

This Dog for Hire won a 1997 Shamus Award for Best First P. I. Novel from the Private Eye Writers of America. So far, there are nine books in the Rachel and Dash series:

Benjamin has also written two stand-along novels, The Wicked Stepdog (1982) and Nobody’s Baby Now (1983), and eight books on dog training.  She has been elected into the International Association of Canine Professionals Hall of Fame.

If you enjoy mysteries that feature dogs, check out these posts: