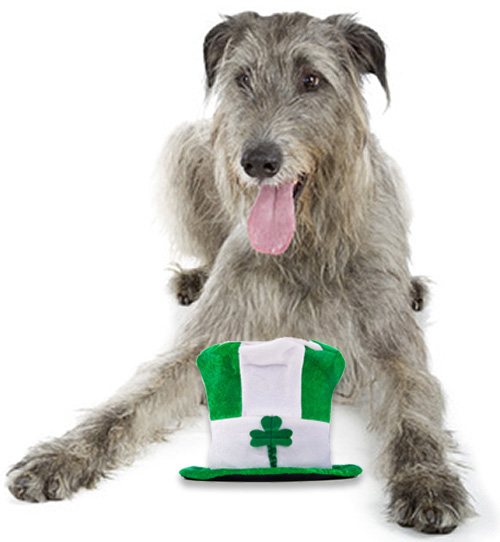 From the wolfhounds coveted by European royalty to stocky little farm ratters, native Irish breeds are a diverse lot. Join us for an introduction.

The most majestic are the wolf hounds (Cú Faoil in Gaelic), so let’s start with the hound group.

Once used as war dogs, the Roman general Julius Caesar mentioned them in his writings about the Gallic wars. From the 5th century into the 17th, these dogs were prized as gifts from the Irish to royal houses in Europe and Scandinavia. In 15th century Ireland, according to Irish Kennel Club (IKC), every Irish county was required to keep 24 wolf hounds to protect farmers’ flocks from wolves.

They nearly became extinct by the end of the 17th century. As Irish nationalism grew in the late 19th century, they made a comeback as a symbol of Celtic history and culture.

On average, they are taller than Great Danes, standing nearly 32 inches at the shoulder. They have deep chests and long legs to gallop. They rely on their eyesight to hunt, usually alone. They have rough coats in grey, brindle, red, black, pure white or fawn. They are know for being quirky, introverted, intelligent and reserved. Irish wolfhounds are loyal and protective of people, but don’t guard or protect property or spaces.

The An Pocadán Ciarraíoch, as the Irish call them, don’t look much like a beagle, being bigger and black and tan, bullied and tan, tan and white or black. The name may come from the Irish word beag, meaning small.

What this breed does have in common with beagles is an instinct for pack hunting. According to legend, when Noah’s ark came to rest on Galtymore, Tipperary’s highest peak, two black and tan hounds smelled a fox and leaped off in pursuit and were never seen again. Pedigree records for the breed go back to 1794 and there is evidence the breed goes back to the 16th century.

Kerry beagles were originally bred to hunt stags, but today more often hunt fox and hare. Many Irish immigrants to America took their Kerry beagles with them. The breed is considered one of the foundations in developing American coonhounds. These dogs have droopy ears and a long, upward curving tail. They are known for their quickness, endurance, independence and baying that can be heard for miles.

No let’s meet the terriers:

These are likely the oldest of the four Irish terrier breeds. For more than 200 years they have worked on Irish farms as herders, watchdogs and vermin hunters. They are sometimes called the “poor man’s wolf hound.”

These medium-sized terriers have a single, soft, silky coat that is light wheat to golden reddish colored and doesn’t shed much. They are bright, energetic, playful, loyal, affectionate and protective but not aggressive.
This breed made its debut at the IKC championship show ring on St. Patrick’s Day 1937.

County Wicklow’s bleak Glen of Imaal is home to these sturdy farm dogs. They nearly died out in the early 20th century and are still one of the rarest breeds of dog.

Called a “big dog on short legs,” they stand about 14-inches at the shoulder and are longer than they are tall. They weigh 36 to 45 pounds. They have a wiry second coat on their backs, but soft fur on the head, sides and legs. They can be either wheaten or blue grizzle colored.

Originally they were bred to get rid of rats, foxes, badgers and other vermin — but silently rather than sounding when they saw prey.

Known as An Madra Gearr in Gaelic, this is another ancient breed.  If you saw the movie “Firehouse Dog” (2007), you’ll recognize this breed.

Weighing in at a compact 35 to 27 pounds, these dogs have a dense, wiry, red, golden red or wheaten coat. They are active dogs that enjoy challenges. For that reason they were used as messenger dogs in World War I.

They are loyal dogs who do best with strong but gentle leadership.  They often try to dominate other dogs and are protective guard dogs.

By the way, the lead character in “Firehouse Dog” (Rexxx, the dog super star) was actually portrayed by four Irish terriers, named Arwen, Frodo, Rohan and Stryder (all characters of places from The Lord of the Rings trilogy.

The An Crocaire Gorm, as the Irish call them, got their start as versatile, hard-working farm dogs used to control rats, rabbits, badgers, foxes, otters and hares and then later to herd cattle and sheep and eventually as guard dogs in the mountains of Kerry.

Irish nationalist leader Michael Collins owned one named Convict 224. He tried to get the breed adopted as the national dog of Ireland. As the breed grew more popular around Dublin, a dog show was organized on St. Patrick’s Day 1921 that included dogs like Kerry blue terriers that weren’t recognized by the English Kennel Club. It led to the formation of the IKC the following January. The Kerry blue was the first dog breed registered by the IKC.

These terriers are small to medium sized dogs with wavy to curly, silky, blue-grey fur. They don’t shed, but their fur keeps growing and needs regular maintenance. Independent, intelligent and loyal to their owners, they have been used as police dogs in Ireland. They can be aggressive to other animals, including other dogs. They are high energy and need a lot of exercise, training and socialization.

Let’s move on to the setters:

These hunting dogs are used to get quail, pheasant and grouse, birds that try to hide rather than flee. Guided by their strong sense of scent, they track prey and then freeze rather than chasing it. Their distinctive crouch or “set” gives them their name.

They have long, silky red or chestnut coats with a fine top coat and a warm, thick undercoat in the winter. These are big dogs, standing up to 27 inches at the shoulder and weighing up to 70 pounds.

They are alert, energetic and affectionate. Their hunting instincts may make it difficult for other pets in the house such as cats. Czars, presidents and governors have loved these dogs as pets including Alexander II of Russia and Presidents Richard Nixon and Harry Truman.

The Irish red and white setter is an older breed than the Irish red setters. They were headed for extinction at the end of the 19th century but the breed was brought back during the 1920s. These are friendly, easily trained gun dogs.  Their short flat fur is white with solid red patches. They have some fringes (feathering) on the ears, neck, chest back of the legs and the belly. Slightly smaller than a red setter, they are similar in their personalities and hunting skills.

Finally, we have the spaniel:

An uncommon dog, the Irish water spaniel looks like a Portuguese water dog with dense, curly, red-purple-brown fur. They don’t shed much, making them a good choice for people with allergies. Their tails are nearly hairless.

Although they have been known in Ireland for more than 1,000 years, not much is known about its ancestors or origins. Bred to fetch game for hunters, they love water, seek to please and are intelligent dogs. That said, some are wary of strangers and they don’t always get along with other animals.

They stand about two-feet at the shoulder and weigh about 65 pounds. They need regular grooming and exercise and do best if their minds are challenged by sports, agility competitions or field work with hunters.