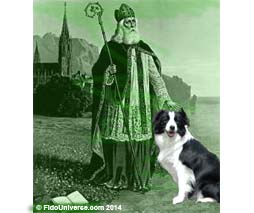 Sure and begorrah we’ll be lifting a glass (or two) to St. Patrick and his dog today.

“Of course!” we, here at the FidoUniverse Hagiographic Institute, reply. “Without the dog, he’d have never become a saint.”

St. Patrick and the snakes

The pure green truth is: There were no snakes in Ireland.

“At no time has there ever been any suggestion of snakes in Ireland, so [there was] nothing for St. Patrick to banish,” says naturalist Nigel Monaghan, keeper of natural history at the National Museum of Ireland in Dublin, who has searched extensively through Irish fossil collections and records.

The myth may refer to the Druids who tattooed their arms with serpents. Given that St. Patrick credited with establishing the Christian Church in Ireland, it might be true to say that he drove serpent-tatooed pagans from the Emerald Isle.

He did definitely have a dog, even if Nigel Monaghan didn’t see fit to mention it.

Here’s the true story of how the dog led the man to sainthood.

The true story of St. Patrick

In 403 CE, Patrick (then known as Maewyn Succat) was 16 and living in what is now Cumbria in the northwestern part of England bordering Scotland. The Romans had withdrawn their troops from this area of Britain just four years before Maewyn Succat was born. It was not difficult for Irish pirates to cross the Irish Sea,  sail past the Isle of Man and kidnap strong young Britons to work as slaves in Ireland.

And that was Maewyn/Patrick’s fate.

For six years, he worked as a shepherd in the green hills of County Antrim. If he was a shepherd, he had to have a dog. One day, as he was leaning against a tree, watching the sheep graze, his dog trotted across the grass, came to lie at his side and put his muzzle on Patrick’s knee. Patrick ran his hand through the dog’s silken black and white coat and looked into its deep brown eyes and fell deeply, completely and eternally into God’s grace.

From then after, he was aware of God’s presence everywhere — in the weed’s blossoming in the grass, in the trees changing colors with the season, in the gamboling of the lambs in spring, in the healing rain, in the wind and in his dog’s total focus and concentration in keeping the sheep together and safe.

The dog led him to sainthood.  He taught Patrick to be in the now, to have loyal faith, and to be aware of the miracles of life.

The movie version will have all the rest of the story: hearing voices that directed him to a seaport and a ship that would take him back to Britain; getting captured again and taken to Tours, France; learning about French monasticism; hearing another voice telling him to bring Christianity to the Irish; and returning to baptize more than 100,000 Irish and form more than 300 churches.

You can bet your shillelagh, he couldn’t have done it without the dog.

Anniversary of the founding of the ASPCA