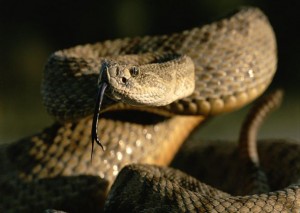 If you live in Southern California or like hitting the wild trails with your dog, sooner or later, you need to think about rattlesnake avoidance training for your dog.

They are a year-round menace for dogs and their owners.

This type of training gives a dog a quick electric shock when he sees, smells or hears a rattlesnake. In the interest of canine-kind, my dog Joey was selflessly volunteered to have a close encounter with rattlesnake avoidance training. Also in the interest of fair disclosure, we paid our $70 fee without renumeration or consideration from the training organization, Natural Solutions.

Poor Joey, whose days hardly get wilder than a three-dog morning on the Starbucks patio, was utterly unprepared for rattlesnake avoidance training.

His enthusiasm for our outing to the Scott-Fox agility training field chilled to nill when I handed him over to his snake trainer.

The trainer exchanged our leash for a shock collar and his own leash on Joey.  Perhaps it was the color draining from my face or the hyperventilation, but the trainer quickly assured me the shock was a buzz or a vibration — like a cell phone or pager — not like the old electric chair at San Quentin. If the sensation isn’t unpleasant to the dog, he won’t avoid snakes in the future. The sensation is adjusted for the dog’s size and can be dialed upward, if the dog needs it.

Meanwhile, another member of the training team had set her cooler of rattlesnakes in the shade and dampened the surface of the training field. She set a piled rock hut with a screened opening under a tree.  An adult snake was put inside the hut.  A trio of baby rattlesnakes were set out about five feet from the cooler. About 30 feet away, she put out some shed snake skins.

As soon as the trainer began to lead Joey around the course, several things became clear. Joey at 11 isn’t seeing or hearing as well as I thought. He nearly stepped on the baby snakes. He got a buzz from the collar. Fortunately, he still has the nose of a puppy.  By the time, he approached the snake skins, he didn’t need a buzz to shy away.

To reinforce this first session, Joey will need one or two more training sessions about a year apart.  As with any other training, what isn’t practiced is forgotten.

Even with this first session, Joey is no longer likely to approach a snake as prey or to toy. But as always, all dog training is people training. My responsibility is to be alert to avoidance behavior when we’re out hiking. A dog can pick up the scent of snake 100 feet away. It gives both of us a better chance of getting out of range.

Here are some other tips for avoiding rattlesnakes that can’t be repeated too often:

If you see or hear a rattlesnake, freeze. Find out where the snake is and check to see that there is only one snake. Calmly and slowly back away until you aren’t in striking distance any more and the snake stops rattling.  Striking distance is about the length of the snake. Listen to hear the rattling stop. Leave the area.  Where there’s one snake, there’s a good chance there will be others.

Where to find rattlesnake avoidance training

Rattlesnake avoidance training costs about $70. Most organizations that offer the training do so once or twice a year, so it make take some searching to find training classes. Here are some options: