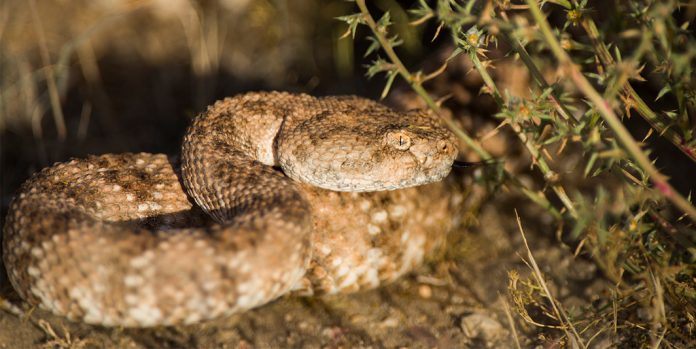 A dog had a fatal encounter with a rattlesnake at the Laurel Canyon Dog Park last week. A second was bitten but is recovering. These incidents highlight how important rattlesnake avoidance training is if you live in Southern California.

Michael Becker DVM, the vet at the Metropolitan Animal Specialty Hospital (MASH) in West Hollywood who treated the surviving dog, said it was the second incident so far this year.  MASH usually treats 20 to 30 rattlesnake bites in the April to October rattlesnake season, he added.

A dozen park users met with a representative of the Los Angeles Department of Recreation and Parks on April 23. They discussed better signage, brush and grass clearance and snake-proof fencing. The recreation and parks department is proposing a rattlesnake barrier fence to be paid for by the department and expanded with community funding.

Why is rattlesnake avoidance training better?

Rattlesnake avoidance training exposes a dog to the smells and sounds of rattlesnakes in a controlled setting. The training uses muzzled, live snakes, baby snakes and shed skin and rattles. The trainer puts a shock collar on the dog before starting the training. When the dog alerts to the sight, sound or smell of the rattlesnakes, the trainer gives the dog a light shock. The goal is to teach the dog that something bad happens whenever he or she meets those sights, sounds or smells.

Young dogs learn to avoid rattlesnakes better than older dogs. The training needs to be repeated. It’s wise to repeat the training in different environments.

Once a dog has been trained, he or she should instinctively avoid rattlesnakes wherever he or she meets them — a dog park, on a hike or even your back yard.

Not all dogs can be trained

Joey was older, probably about 11 years old, when he went through training. His hearing wasn’t very keen and his nose was losing its keenness. He didn’t alert strongly to the sound or scent of the snakes, but he did enough to get a shock. The trainers advised repeating the trainer later. They also made me aware that his training wasn’t strong so to be cautious and vigilant where rattlesnakes might be found.

Spike was a total flunk out. He nearly stepped on the baby snakes. He didn’t react to an angry rattle. In fact, he failed to react to the snakes. The trainer never could see a reaction to pair a shock to train Spike. At that point, we crossed hiking off our activity list.

Here are some tips for keeping your dog safe from rattlesnakes from the California Department of Fish and Wildlife:

There were no “Caution rattlesnakes” signs up in Laurel Canyon Park before the two dogs were bit. If you love your dog, behave as if there are rattlesnakes around when you go out into hilly or wild areas with your dog whether there are signs or not.

Remember not all vet offices have rattlesnake anti-venom. Have a plan in case your dog gets bit. Lili, the surviving dog bit at Laurel Canyon Park, was taken first to one animal hospital for an anti-venom shot. That hospital didn’t have any more anti-venom, so Lili had to go to a second hospital, MASH.