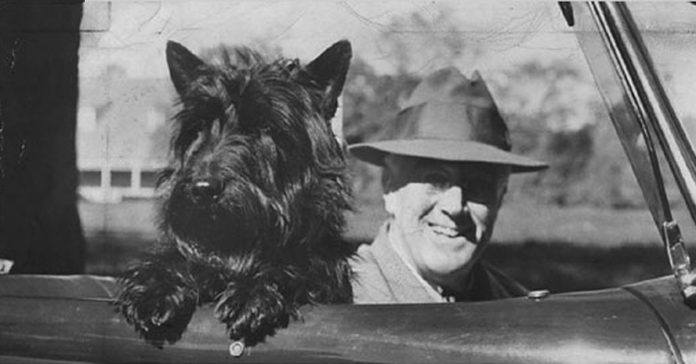 Just ask Falla, Franklin Roosevelt’s Scottie, or Checkers, the Nixon family’s cocker spaniel. Him, Lyndon Johnson’s beagle, caught on camera being lifted by their ears, could, too. And there’s Millie, the English springer spaniel, whose intelligence her owner, President George H. W. Bush, lauded at the expense of his opponents, candidates Bill Clinton and Al Gore.

President Franklin D. Roosevelt’s Scottish terrier, Fala, was the focus of a scandal when rumors surfaced that the president had spent thousands of tax dollars retrieving her after being left behind on a visit to the Aleutian Islands.

Roosevelt responded, “You know, Fala is Scotch . . .  as soon as he learned that the Republican fiction writers in Congress and out had concocted a story that I had left him behind on the Aleutian Islands and had sent a destroyer back to find him – at a cost to the taxpayers of $2 or $3 or $8 or $20 million dollars – his Scotch soul was furious. He has not been the same dog since. I am accustomed to hearing malicious falsehoods about myself . . . but I think I have a right to resent, to object to libelous statements about my dog.” 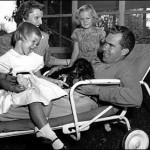 Checkers, Richard M. Nixon’s cocker spaniel, was involved in another scandal during the 1952 presidential campaign. At the time, Nixon was accused of hiding a slush fund that allegedly allowed him to live in a style far beyond his $15,000 a year senatorial salary. The controversy nearly sank his bid for the vice presidency under Dwight D. Eisenhower. While he denied the existence of the fund on national television, he admitted, “We did get something, a gift, after the election . . . It was a little cocker spaniel dog, in a crate that [a man] had sent all the way from Texas, black and white, spotted, and our little girl Tricia, the six-year-old, named it Checkers . . . “I just want to say this right now that regardless of what they say about it, we’re going to keep it.” 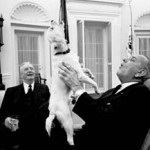 Johnson, although he got black marks from the public for picking up his beagle Him by the ears, was a great dog lover.  He favored beagles but he also had dogs of mixed breeds as well.  In the picture to the right, he is howling with his dog Yuki in a meeting with the U.S. Ambassador to Britain.

President Abraham Lincoln’s dog Fido didn’t get to come to the White House although it did get its photograph taken with the eventual president. Through a macabre twist of fate, Fido was stabbed by a drunk within a year of his owner’s assassination. His photograph was turned into a card in high demand by tourists.