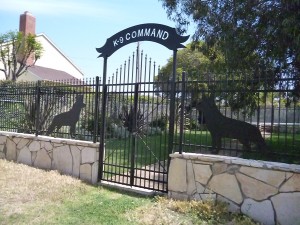 Flags will flutter over the graves of veterans across the nation this Memorial Day. But at a unique cemetery for military dogs at Fort MacArthur in San Pedro there will be little fanfare.

The shade of a eucalyptus tree will glide across the well-tended grass. Sparrows will hop and peck the central hard dirt path. The intermittent, flat grave stones will warm in the sun.

This is the K-9 Command Cemetery, the final resting place of members of one of the first American war dog platoons, developed in 1941.

An additional two dozen military dogs lay beside them behind the former base chapel.

Dog have served in battle since ancient times. The Romans used battle-trained Molossian dogs fitted with protective spike collars and armor. They had attack formations made up entirely of dogs. The Spanish conquistadors used armored dogs trained to kill and disembowel when they invaded South and Central America.

In the United States, the first military dogs were used in war during the Seminole Wars. American Pit Bull Terriers were used during the Civl War as guard dogs and messengers. Young recruits sometimes brought their own hunting dogs with them.

Years later, during World War I, dogs had become so useful to the military that an estimated one million dogs died in action. They delivered messages, did sentry duty, pulled ambulance sleds, tracked the enemy and searched for and comforted the wounded.

Despite dogs’ proven usefulness in war, the U. S. Defense Department was reluctant to have formally trained military dog units until World War II. In the late 1930s, civilian dog trainers and lovers initiated the “Dogs for Defense” program to encourage Americans to donate their pet dogs to the war effort.

Suitable dogs from that program were referred to the K-9 Command program. Dogs in this group were trained to attack and guard. Previously, most military dogs were trained to do guard duty, bomb- and mine-sniffing, message-carrying and scouting.  The mission of the K-9 Command program was largely unpublicized and records are incomplete.  It is not known whether they served abroad.

When Sgt. Robert H. Pearce organized the war dog platoon at Fort MacArthur in San Pedro, he sought aggressive, physically fit dogs up to three years old who would stand their ground without cowering. The dogs could not be gun-shy.  According to the base newsletter, the goal of the dog platoon was to “conserve manpower and strengthen the guard by giving sentries an added weapon.”

For assistance in selecting and testing dogs for the program, he turned to Hollywood — dog trainer Carl Spitz, in particular who had trained Toto for “The Wizard of Oz” (1939) and Buck from “The Call of the Wild” (1935).

In January 1942, weeks after the Japanese bombed Pearl Harbor, a publicity campaign appealed to dog owners to volunteer their pets for war duty. Hundreds arrived at Pershing Square in downtown Los Angeles for assessment.

Six dogs were selected that day for the K-9 Command, including Bruno, a 65-pound chow mix; Rin, a German shepherd, who was the grandson of Rin-Tin-Tin. The following year, the K-9 Command started breeding dogs for military service.

The military dog training program at Ft. MacArthur continued into the mid-1970s. Many of the dogs were used to guard the 16 Nike missile sites in Orange and Los Angeles counties.

When those sites were abandoned, the dogs were retired.  Unfortunately, under a 1949 policy, military dogs were not allowed to return to civilian life because they were considered dangerous. When they retired, they were put to death.

Thanks to years of campaigning by Woodland Hills veterinarian William Putney,  this policy ended in 2000. (A retired Marine, Putney worked with war dogs during the invasion of Guam and was a former president of the California Veterinary Medical Association. He wrote Always Faithful; A Memoir of the Marine Dogs of WWII.)

Today, many retired military working dogs can be adopted and returned to life with civilian caretakers.

Tragically, canine veterans of the Vietnam era were left behind when the U.S. withdrew.

Most of today’s military working dogs and their handlers are trained at Lackland Air Force Base near San Antonio.  They play an inestimably valuable role in helping their handlers find improvised explosive devices (IEDs) and stockpiled armaments before they can be used against American troops and civilians.

Remembering Those Who Served

On this day of remembering those who have served our country so well, let us also remember the military working dogs who gave their lives to serve.