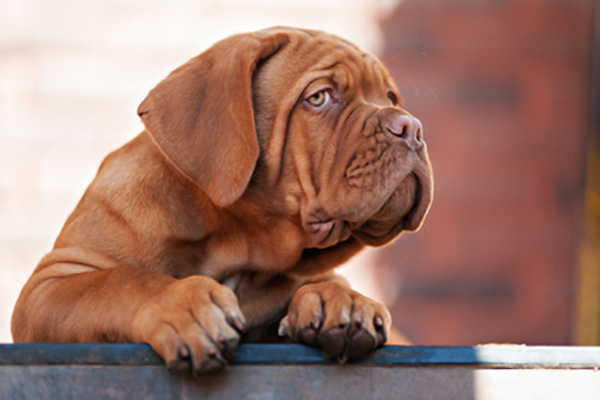 Mastiffs are enormous dogs with soulful eyes and droopy, drooly flews. They are members of a breed so ancient Julius Caesar described them in his writing about invading Britain in 55 B.C.E.

According to the American Kennel Club, mastiffs stand 30 inches at the shoulder and outweigh many full-grown men. They are muscular dogs with short, double coats in fawn, apricot or brindle-strip.
What most people think of when they hear the word “mastiff” is the Old English mastiff, which has been bred in England as a guard dog for nearly 2,000 years.

While historians believe they originated in Ancient Greece, today they can be found around the world including Tibet (the Tibetan mastiff), Italy (the Abruzzese mastiff, the Neapolitan mastiff and the Cane Corso), Brazil (the Fila Brasileiro), South Africa (the Boerboel), Japan (the Tosa Inu) and Pakistan (the Bully Kutta).

They caught Caesar’s attention because they fought alongside their masters against the Roman invaders. Drawings on Egyptian monuments show mastiffs may have dated back to 3000 B.C.E. The earlier written reference to them was made in 1121 B.C.E.

In terms of personality, they protect their loved ones and are suspicious of strangers. Despite their ferocious appearance, they are even tempered and make good family pets. Because of their size, strength and protectiveness, it’s important that they be well-trained and socialized young.

Unfortunately, like many large breeds of dogs, mastiffs are prone to a number of health issues, including hip and elbow joint problems, heart conditions, eye issues and bloat.