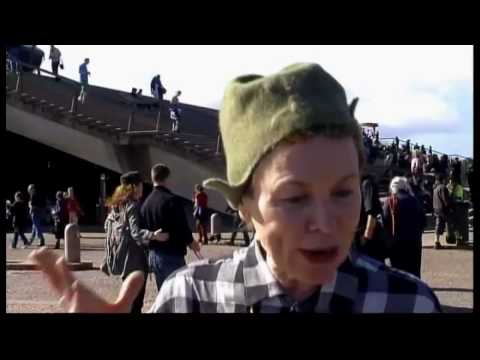 Joey is so peeved at me.

We missed artist Laurie Anderson’s Music for Dogs concert June 5 at the Sydney Opera House. It was part of Sydney’s Vivid Art and Music Festival, co-curated by Anderson and her husband, musician Lou Reed.

Billed as “an inter-species social gathering on a scale never seen before in Australia,” the 20-minute concert featured sounds largely out of the range of human hearing. It included the cries of whales, white music, high-pitched electronic sounds along with bass guitar, violin and slide whistle.

The idea came to Anderson in 2009 while back stage with cellist Yo-Yo Ma at a graduation ceremony. The two musicians chatted about how wonderful it would be look at on an audience and see just dogs. Until the June concert, Anderson and Reed had only ever performed music for their rat terrier, Lollabelle.

Anderson has gone on to do a similar event at the January 2016 Midnight Moment at Times Square. Her contribution was a three-minute cut of her documentary “Heart of a Dog,” a poetic visual essay about, among other things, the journey from life to the afterlife.

Can you recommend a good dog mystery?