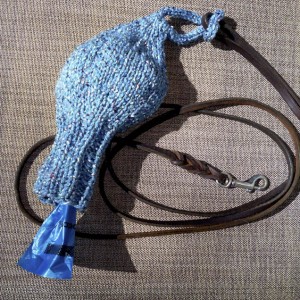 Pumpkins have replaced watermelons at the local Ralphs. The calendar says autumn starts on Sunday, so we’re pulling out the knitting needles and yarn.

Joey — or rather me on his behalf — is going to be the first beneficiary of the 2013 knitting season. We’re using hollypknits pattern for Bentley’s Leash Bag Holder.

Picking up poop is not my favorite activity, but I accept that it’s my responsibility as an urban dog companion. But I hate those coy little plastic bag holders.  You know the ones shaped like fire hydrants or purses or dog bones. They break and they only hold the expensive rolls of poop bags.

I tend to recycle the plastic bags that wrap my newspaper or better yet wholesale bags from G.T. Bag Co., which cost 2-cents each after tax and shipping. When my eco-guilt about adding plastic to the planet reigns and I turn to compostable poop bags from BioBag, I’m still faced with flat bags that don’t come in rolls.

That’s why I was delighted to find Holly’s pattern for a poop bag holder that attaches to a leash. If you like knitting for dogs, this free pattern is a quick knit and very suitable for using up those left over  bits of worsted. The pattern below is Holly’s, rewritten lightly for clarity.

This poop bag holder is knit in the round. The bottom ribbing is done on Size 7 needles in a knit (k) 2, purl (p) 2 pattern for 18 rounds. The base of the bag storage area is created by a series of increase rounds, alternating with two rounds of plain knitting. This is followed by a mid-section of plain knitting to build volume for the bag storage. A series of decrease rounds, alternating with plain knitting rounds creates a spire like shape. When there are only three stitches left on the needle, you begin knitting I-cord to create a loop on the top of the bag.

Cast 28 stitches on to the smaller, size 7 needles. Join the beginning and end stitches being careful not to twist the stitches. (Some knitters cast on an extra stitch and knit the first and last stitches together to join more tightly.) You can add a stitch marker to keep track of the beginning of the loop, although I used the tail of the cast on to tell me where the next round begins.

Follow the pattern until there are 44 stitches on the needles. (Mathematically, this would be four increase rows or 10 rows total from the start of the increase section. This is a poop bag, however, and you won’t be deported from Ravelry if your knitting doesn’t match the math.)

The next section of the pattern is straight knitting for six rounds to build extra room for the bags.

The decrease section calls for decreasing four stitches (by knitting two stitches together four times) in the decrease row followed by one row of straight knitting. The fact that you are decreasing every other row (instead of every third row — the pattern of increase rows) gives the bag the look of a Russian Orthodox onion dome. It also means you’ll have less bulk where the bag attaches to the leash.

Again randomly distributed the decreases around the row. It should be roughly evenly.
When there are three stitches left on the needle begin making an I-cord. This requires either two double-pointed needles or a circular. Instead of knitting a row and turning your work, which would create a piece of flat knitting, you knit a row, and slide your stitches to the other end of the needle.  The yarn now pulls around from the back stitch to knit the front stitch, making a narrow tube or cord.

Make the cord about 9.5-inches long.  This is a good length for looping the bag on a one-inch wide leash. Knit all stitches together.  Securely weave the loose end into the stitches of the bag.

Then just loop, load and lope.

For the sake of mobility, we’ve included a PDF file of the pattern below. Perfect for knitting at the dog park!

Give shelter dogs some holiday comfort before Dec. 31