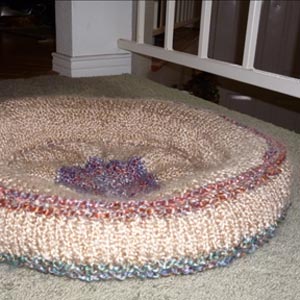 One of the best gifts Fido and I gave this season was to a friend whose dog, Denny Covina, was rescued from a Denny’s restaurant in Covina, where he apparently was abandoned.

Denny’s feisty bark and impertinent wiry Mohawk suggest that he is part Terrier.  He’s small enough that he might have a pinch of Chihuahua in him. Then again, he has a longish body that whispers “wired-haired dachshund.” Who knows? And more to the point, who cares? Denny and Joey hold up the terrier side of the morning walking pack proudly.

For Denny’s Mom’s birthday, I made a Snug Harbor Knit Snuggle.

This is one of several knitting projects in the pattern library of the Snuggles Project.

The Snuggles Project is a special undertaking of Hugs for Homeless Animals.

Its founder, Rae French, like many of us, believed that animal shelters were where you take animals to get new homes. She had always fed homeless animals that came to her door and provided shelter when a warm, dry place was needed.

One of her regular visitors, a homeless, periodically pregnant Siamese cat she called Lady Siam taught her the cold reality of homeless animals.

Lady was open to some touching but was very wary of people. She appeared on Rae’s steps pregnant and close to labor. Rae already had two cats. Believing the local human society would be able to place such a lovely cat and its soon-to-be-born cute kittens took Lady Siam there.

A huge blackboard on the shelter wall spelled out the facts: how many animals were brought in, how many were adopted, how many ended up being put down. A poster showed a basket of adorable kittens with the headline, “Pick one and kiss the rest good-bye.”

Overwhelmed, she and her husband returned home with Lady Siam, who gave birth to five kittens within hours of their return.

A round of visits to other shelters in her community confirmed the grim facts. Racking her brain for some way to help the animals held in cages and kennels, Rae realized that one thing she could do was make them more comfortable while they waited for adoption.

As a child, she had learned to knit and enjoyed making blankets that she called “Snuggles” for her cat Fuzzy.  At the time of her efforts to save Lady Siam and her kittens, Rae was running an online crochet group, Crochet Partners, with more than 2,000 crocheters worldwide. She put out an appeal and Snuggles began arriving. So far, more than a million Snuggles have been given to shelters and rescue organizations around the world.
While giving a homeless animal a blanket or a warm bed to sleep in at a shelter seems simple, it has many benefits, including:

The pattern I made for Denny was the Snug Harbor Knit Snuggle. Made using two colors of bulky weight yarn, the snuggle is a huge circle worked from the outer circumference to the center. When the knitting is completed, quilt batting is laid in roll inside the outer edge.  The edge is pulled over the batting and stitched down making a walled bed.

The pattern is easy to follow and works quickly. A variety of other Snuggle patterns are offered, including a variety of flat blanket-style knit snuggles, no-sew fleece blankets and crocheted blankets and pillows.

Given how fast, easy and affordable Snuggles are to make there’s no excuse for not making several to donate to your local shelters. This would be a great project for a club, a community service project or a children’s activity to teach the art of helping those less fortunate.