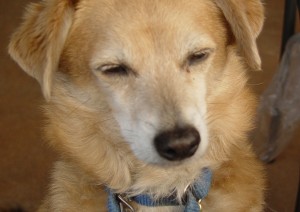 I thought the first symptom was just a trick of light. A neighbor and dog friend said, “There’s something off about Joey’s left eye.”

I looked. I saw a flash of golden eyeshine at the back of his eye. “It’s just a flash of light,” I thought.

The second symptom seemed like no more than cute dog behavior on a sunny morning. He would sit staring at a friend eating a breakfast muffing at Starbucks. His eyelids would flutter faster than a Southern belle’s. “He’s so cute when he does that eye thing,” she cooed.

Slowly I realized that his left eye always had more eyeshine than his right. The one evening as I was sitting on a dark patio with a light shining behind me, that Joey’s right eye was almost all black, but his left eye was wide and golden.. It suddenly hit me that the pupil in his left eye wasn’t changing with the intensity of the light.

A visit with Dr.  Svenja Viete of the Eye Care for Animals confirmed that he had atrophy of the iris in his left eye.

The iris is a ring of tissues (called stroma) and muscles that surround the pupil in the center of the eye. These muscles can pull tight or relax outward to control the amount of light that enters the eye. There is a ring of tissue behind the iris that attaches to the ligament that holds and moves the lens. The iris helps with focusing an image on the retina of the eye and releases fluid to nourish the cornea. (The cornea is the transparent, semi-spherical part of the eye that covers the iris and pupil. Along with the lens, it helps the eye focus.)

The eyeshine I was noticing comes from the tapetum lucidum — Latin for “bright tapestry.” It is a layer of reflective tissue under the retina at the back of a dog’s eye. In effect, it magnifies the light available to the eye, making it easier for dogs to see at night or when they are hunting in low light areas.

She shined a light in his eyes and followed up by dilating his eyes and testing the pressure inside his eyeball to see if he had glaucoma.

What is iris atrophy?

Iris atrophy is when the muscles of the iris shrink or the stroma becomes thin. It stops responding to changes in light.

The condition is due to normal aging, eye infections or glaucoma.  It can affect any breed, but it’s more common in small dogs such as chihuahuas, miniature poodles  or miniature schnauzers.

While iris atrophy doesn’t usually affect the dog’s ability to see, it can make him sensitive to light. (The fluttering eyelids my friend admired, is a sign of light sensitivity. Other signs and effects of iris atrophy include:

Once the damage to the iris has occurred, it can’t be reversed. If it is the result of glaucoma or an eye infection, that can be treated and the condition won’t get any worse.  If the condition is due to aging, it will progress.

At a certain point, according to Dr. Viete, the damaged iris may not be able to hold the lens of the eye place.  It may fall forward or toward the back of the eye, creating a half-moon effect.  At that stage, surgery is needed to remove the lens.

Iris atrophy is progressive, irreversible and untreatable. For now, Joey and I are walking earlier in the morning and later at night to avoid bright sunshine.  I’m paying more attention to the direction we walk to avoid sun in his eyes. I’m hoping we can slow the progress.