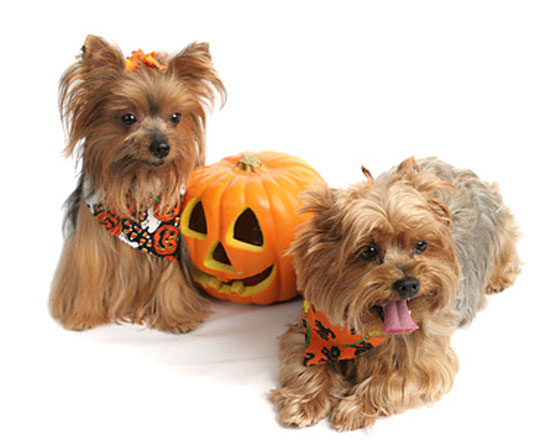 But first, a real fashion horror story we experienced once upon a Halloween spooky at a local Three Dog Bakery part and dog Halloween costume contest.

Our friend Fido’s naive owner wanted to go but failed to plan a good costume. At that late date there was little choice left at the pet stores. She was forced to buy a lame bumble bee costume. It was embarrassing and kept twisting around Fido’s body and getting under his paws.

A bad idea when you’re attending an almost-Hollywood-adjacent costume party.

There, at the center of the bakery, surrounded by admirers, was — oh, let’s just call her “Crystal” for the sake of staying out of court. Charmingly displayed in Crystal’s arms was her Chihuahua, whom we’ll call LaLa to save her further embarrassment.

LaLa’s ears were pinned flat under a stretchy black wimple with huge mouse ears. A giant white-dotted red bow rested on her forehead. Her body was swaddled in a gathered polka-dotted red skirt. Big vinyl cartoon shoes enclosed her paws. She was so decked out Disney probably sent a trademark inspector to her dog house to investigate possible infringements before leaving for the party.

The owner of a blond spaniel dressed in a Hawaiian shirt and lei was speechless at the sight of LaLa. In the absence of close supervision, the spaniel sampled biscuits from the closest bin.  A bulldog in a tuxedo and red satin-lined cape huffed and sat sidesaddle on the floor. Her owner reached out to touch LaLa’s Mary Jane’s.

Fido did a full-body shake trying to lose his wings. The crowd around Crystal and LaLa, edged Fido and his chastened owner out of the glory light. Pushed toward the door and an adjacent bulletin board, Fido’s owner caught sight of photos of last year’s Halloween contest photos. Crystal was holding LaLa dressed in a red devil costume.

Five photos over was the last Christmas party. There were Crystal and Lala, wearing matching angel’s costumes with bobbing halos and white ostrich feather wings.

Crystal and LaLa weren’t just dropping in for a dog biscuit and Halloween fun. They were a brand.

That story led us (Vera and Pierre) to developed these four tips for dog Halloween costumes: