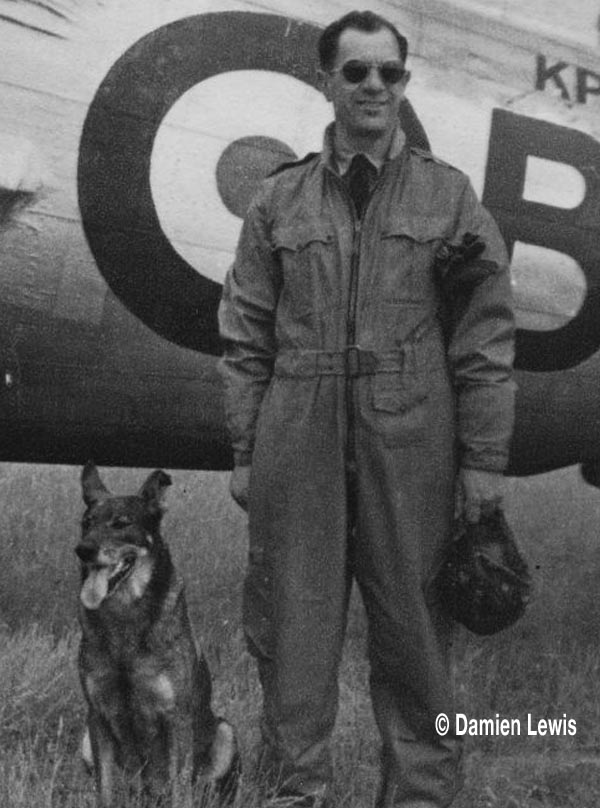 There are many dogs who should be honored on Veterans Day, from Sgt. Stubby, the most decorated war dog of World War I, to Cairo, who was a member of the team that killed terrorist Osama Bin Laden.

But the dog that has touched our heart most recently is Antis, featured in Damien Lewis’s book The Dog Who Could Fly; The Incredible True Story of a WWII Airman and the Four-Legged Hero Who Flew at His Side. Found as an unweaned puppy by downed Czech airman and gunner Robert Bozdech, Antis grew up to fly with him and saved the lives of Bozdech and his fellow airmen repeatedly.

The pilot and the puppy

Shot on a reconnaissance mission over the Siegfried Line in World War II, Bozdech and pilot Pierre Duval crash-landed. As flames edged toward the aircraft’s fuel tanks, Bozdech pulled the badly injured Duval from the cockpit and toward a nearby farmhouse.

As he checked out the farmhouse, he heard a faint snuffling sound, almost like snoring. Pistol cocked, he yelled for the person to come forward.  There was no response. Bozdech crept forward to see more.

“One moment there was a tiny ball of gray-brown fluff curled up beneath the chair, the next it had stumbled to its feet unsteadily and was peering up at him anxiously, growling out a throaty little challenge.” It was the start of an intense relationship that lasted until the German Shepherd’s death in 1953.

Antis began flying with Bozdech after Germans fired on the French airbase where they were stationed. It was the best way to protect the dog while the enemy was so close on the ground. At four months, Antis jumped into the gunner’s area, curled up tightly on the floor at Bozdech’s feet.

After the Germans occupied France, Bozdech, six fellow Czechs and Antis headed to England. The dog created diversions and made the people they met less suspicious. Thus, Bozdech and his companions could  steal supplies and a cart for their journey. The men even stowed Antis away on a British military ship. They disembarked without the dog getting rounded up for quarantine.

Antis’ reputation grew. His keen hearing alerted those around him to incoming German bombers even before radar and air raid sirens did. Antis paid the price — being buried in rubble for three days — when the humans ignored his alert. He served as a search and rescue dog after bombing raids.

Playful, goofy, loyal, smart and morale-building — Antis became the group’s mascot. After running afoul of British bureaucracy several times, he eventually was allowed to move freely around the base. But the authorities grounded him.

The dog would follow Bozdech to the plane for pre-flight checks and watch it take off.  Then he waited near the loading area — through night and bad weather, if need be — until the plane returned. Once when Bozdech’s plane was badly damaged over Germany, Antis howled and refuse to eat until he was reunited with the injured Bozdech. The next time Bozdech got ready to fly, Antis couldn’t be found. Then Bozdech discovered him in his gunner’s turret waiting.

Bozdech decided to let him stay in place without telling anyone. The wing commander agreed to turn a blind eye. An oxygen mask was custom-made for the dog. Once, when the crew faced having to bail out of the plane, they opted to make a risky emergency landing. (Antis didn’t have a parachute.)

Antis’ flying days came to an end when he was seriously injured in a bombing raid to Mannheim. The bomber ran into heavy shelling and was seriously damaged. The dog was treated at a military hospital but was never allowed to fly again until the war ended. On Aug. 15, 1945, Bozdech, with Antis at his feet, flew in a formation of Liberators back to his Czech homeland.

Although many of his Czech and RAF friends didn’t survive the war, Antis did. He and Bozdech also escaped Soviet-controlled Czechoslovakia where anyone with links to the West — such as former RAF airmen — was being purged.

Antis and Bozdech returned to England in 1948. Bozdech rejoined the RAF and was granted British citizenship. In 1949, Antis was awarded the Dickin Medal from the People’s Dispensary for Sick Animals for bravery in service in England and North Africa during World War II.

This brave and loyal dog died in August 1953 after being ill for several months.  He was buried in the Animal Cemetery in Ilford, England.

The Dog Who Could Fly is an extraordinary story about an extraordinary dog and his extraordinary relationship with the man who rescued him as a puppy. This book, with its story of loyalty, courage, love and survival, is ideal to savor on this Veterans Day.

This is also a wonderful day to pay tribute to military war dogs at their cemetery at Fort MacArthur in San Pedro.