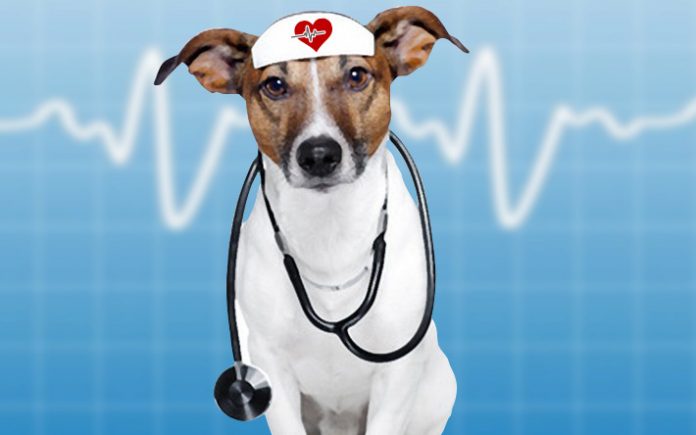 I’d never heard of hepatocutaneous syndrome until a vet suggested that Joey’s decaying paws and disorderly coat might be signs of this rare, chronic and fatal disease.

I’d known for months from his intense paw-licking and difficulties walking that something was wrong and getting worse.

It wasn’t surprising that I’d never heard of the condition. Nor was it surprising that the first two vets who saw him didn’t come to that diagnosis. It’s an uncommon, progressive condition, usually seen in older dogs. When Joey first started showing problems walking, his paws looked normal. Three months later, they were hard, sore and had a rusty crust between the toes and pads.

It is a collection of symptoms (a syndrome) that involve the liver and skin (hepatocutaneous). Precisely what causes the symptoms is usually not known. It can be due to tumors of the liver or pancreas; a lack of zinc in the body; a reaction to phenobarbitol therapy — or other unknown causes. Many complex hormones, glands and metabolic processes are certainly involved.

Whatever the cause is, the liver’s ability to make proteins and fatty acids is disrupted.  The skin and coat don’t get enough nourishment and start deteriorating.

One of the most common signs is a crust that builds up around the muzzle, the eyes, the genitals or the anus or at pressure points such as footpads or elbows. Because of the damage done to the skin, the condition is sometimes called necrolytic migratory erythema or superficial necrolytic dermatitis. The crusty areas can develop yeast or other infections.

On the paws, the pads get thick and hard making walking painful. There may also be a smell that doesn’t go away after a bath. 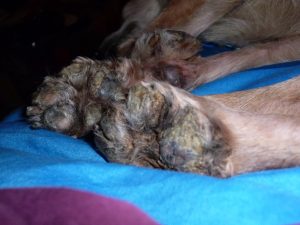 Other signs include a lack of energy, depression, a loss of appetite. In Joey’s case, his coat has slowly lost its glossy, golden shine and has become rougher, darker and curly.

In July, nothing in Joey’s blood work flagged a reason to be concerned. His liver enzymes were a little high, but not dramatically so.

About a week before we were referred to a specialist, he had a blood test and a urinalysis. There were changes since his last lab work; he now had high blood sugar and mild anemia.

It was the abdominal ultrasound that changed everything: it showed a honeycomb or Swiss cheese-like look to his liver. This is a classic sign of hepatocutaneous syndrome.

The vet who did the ultrasound told me that they could do a liver biopsy to rule out cancer or other liver conditions. Given that all symptoms point to hepatocutaneous syndrome, I opted not to do the biopsy. I’ll discuss my reasoning in a later post.

Sometimes a skin biopsy of the  paws or other affect areas is done. The scab-like crust and swollen underlying tissues have a “red, white and blue” quality that is used to diagnose hepatocutaneous syndrome. This type of biopsy rules out conditions like pemphigus foliaceus, an autoimmune disorder, or zinc-responsive dermatosis, caused by a lack of zinc, which cause similar lesions.

Treatment depends on whether a cause can be identified. If tumors are involved and can be removed successfully, the condition may go away.  But the type of tumors involved often come back; in the disease’s late stages, surgery may not even be possible.

But if, as is the case with Joey, there’s no cause that can be identified, the only thing that can be done is to give an intravenous infusion of amino acids once a week for four weeks. (Amino acids are the building blocks of proteins. The infusion helps balance the lack of protein caused by the condition.) It is not a cure and it doesn’t help him live longer. When the treatment works, which it does in only 60 percent of the dogs who receive it, the symptoms are relieved and the dog has a better quality of life.

In Joey’s case, there was some improvement but not as much as we’d hoped. The greatest improvement was after the first treatment: he had more energy and alertness; his walking was easier; his paws improved. There was less improvement after the second, third and fourth treatments. A blood test done during the first treatment showed he has diabetes now and will be on insulin for the rest of his life.

For several weeks after his last treatment in December, his appetite played hide-and-seek. A picky appetite is typical of a liver condition, but a challenge when you’re trying to get more proteins into a dog and keep his blood sugar even at the same time.

His vet recommended a cod-based liver-support diet from Just Food for Dogs and three to six egg yolks a day. The egg yolks were nearly impossible to get down him. He ate the liver-support food for about five days and then refused it. For the next several weeks, meals were nightmarish.  Whatever I tried — frozen raw food; premium canned food; organic, grass-fed beef; FreshPet turkey from Whole Foods; home-cooked chicken thighs — would work for several days and then he’d turn his nose up at it. For awhile, his vet prescribed an appetite-stimulant.

Since Christmas, he’s been eating Little Cesar lamb dinners alternating with beef.  For whatever reason, he continues eating them with a good appetite. With more food, he’s stronger and less wobbly.

The statistics say that from the first symptoms, the median lifespan of a dog with hepatocutaneous syndrome is five months. That is to say that half the dogs with this condition live longer than five months — and half live less. Joey is now six-and-a-half months past his first symptoms.

For now, Joey and I are taking things a day at a time. I work to keep our lives calm and routine. We spend much more time on meals, teasing out his appetite and staying on track with his medication schedule.

It’s a small pay back for a dog who has given me such joy for so many years.