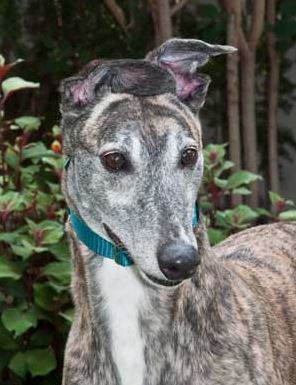 While April is the official Adopt a Greyhound Month, every month is a good one to adopt a greyhound, according to Karen Casady, a San Fernando Valley resident.

Her first, Ivy, was a retired racing dog. Her second came from a greyhound puppy farm in Kansas.

“I’ve had dogs my whole life, really,” Casady said. “‘Doggie’ was my daughter Emma’s first word. That dog — Polly — was an Australian shepherd mix.  She was a really great dog. She’d run around the pool when the kids were in the pool ‘herding’ them.”

When Polly died, the Casady family waited eight months before getting another dog. Karen’s long-time interest in greyhounds rose up.

“We started talking to our vet about different breeds and different ideas about another dog,” she said. “We talked about greyhounds or another dog like Polly. The vet said, ‘This is what you need to know about greyhounds: they are friendly, loving and mellow.’ That resonated for me. And he was absolutely right.”

Lean, long-legged and elegant, greyhounds have been immortalized in European tapestries, book illuminations and art. They are an old European breed of sight hound. They chased game on aristocrats’ estates, but were intelligent, quiet and loyal enough for the castle. 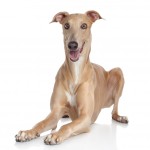 Their powerful legs can take them to a full speed of nearly 45 mph in six strides. Their gait allows them to have all four feet off the ground when their legs extend and again when their legs contract together.

Such great sprinters were ideal for racing, a sport born just 372 miles north of Los Angeles — at least in its modern form. Owen Patrick Smith invented the mechanical hare in 1912. Seven years later, he opened the first professional dog-racing track with stands in Emeryville, Calif.

Concern for the dogs has tarnished the sport. Voters in Florida banned the sport effective Dec. 31, 2020. Profits have been falling for 20 years. In the decade between 2001 and 2011, the total amount gamblers spent on  greyhound racing across the nation fell 67 percent.

After talking to her vet, Casady went online and discovered the Greyhound Adoption Center near San Diego.

A 30-year-old organization, Greyhound Adoption Center has a network of 200 volunteers throughout California to assess potential homes for rescued greyhounds, matching families with dogs and supporting new greyhound owners after adoption.

“A representative came to our house with her two greyhounds,” Casady said. “We’d had dogs, so we had a dog-friendly house and yard. They checked us out and said, ‘Okay, we’ll profile a dog for you.'”

The profile takes into account other pets — the Casadys had three cats and two parrots — space, neighborhood and other factors.

“When we went down to their center, they asked if we wanted to see some dogs.  They just turned us loose among a bunch of greyhounds.  Ivy just came right into our family group,” Casady said. “It turned out that she was the one they had selected for us — but she actually picked us.”

A red brindled greyhound, Ivy had raced at the Caliente, Mexico, dog track for four years.

“There are a lot of reasons why a dog stops racing,” she said. “Sometimes they are injured. Sometimes they start losing. Years ago, they used to destroy them. That gave them (greyhounds) the reputation of being unadoptable. The media got on to the story and the National Greyhound Association took such a PR hit that they started working harder promote greyhound adoptions.”

When she wasn’t racing, Ivy spent most of her life crated.

“She didn’t know what a house was,” Casady said. “We have a pool. She’d never seen one before.  She walked into the backyard and straight into the pool, where she sank like a stone. My son started striping off his clothes to jump in and save her.  By the time he got into the pool, she’d floated back to the surface and was paddling around.”

It took two weeks of letting her into more and more of  the house and yard before Ivy started to understand that her world was larger than a crate. Because she had never had a puppyhood, she never became interested in toys or cuddling.

“She was the most wonderful dog ever,” Casady said. “It took her about two years to become a dog dog. She had to learn that she wasn’t a working dog anymore; she was retired and her only job was to decide which couch or which bed to lounge on.”

When Ivy died at the age of 12, the Casadys adopted another greyhound, this time a 68-pound seven-month old from a puppy farm in Kansas: Ella Bella Stella Violet the First.

“The Greyhound Adoption Center decided that because we were experienced adopters, we could handle a puppy, ” Casady laughed. “I think that less experienced people would have said, ‘We’re done!’ long ago.”

Where Ivy was older and work disciplined, Ella is exuberant, wild and mischievous. She looked at the family cats and birds as interactive dog toys. She was also a dominant female and got aggressive with Casady’s husband Tim until they intervened with a trainer experienced with greyhounds.

If you’re adopting a greyhound

Greyhounds make wonderful pets. Consider these if you’re thinking about adopting a greyhound: