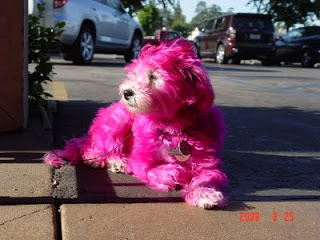 No, it’s not Photoshopped.

A lanky Goth Girl, all dressed in black, stopped at the patio fence to tie up this dog before she went into Starbucks.

People lined up beside me to take this dog’s photo with their cell phone cameras.

Of the half dozen or so people with whom I’ve shared this photo, all of them have reported that it was a terrible, cruel and disgusting thing to do to a dog.

When I was a child, pastel colored ducks and chicks went on sale around Easter. The practice was eventually made illegal. No so much because the dye injured the animals as it seduced people who weren’t serious about the responsibility of caring for baby animals into purchasing them. It blurred the line between a toy and a living, sentient animal.

I read that it’s become quite the nouveau thing — color your pet to match your decor, to celebrate a holiday (as in St. Paddy’s Day green) or punk it up with a blue tail, purple paws or an orange mohawk. It’s something that many groomers offer.

Some animal activist groups believe that it is harmful to the animal. Cats, for example, might get sick grooming their dyed fur. Dogs with hot spots or sensitive skin can develop rashes or other skin irritations from the dye. Human hair dye is definitely dangerous for animals.

Groomers use special dyes designed for animals. Some people say even these dyes are mildly toxic. Natural dyes made from fruit or vegetable juice such as beets, carrots or blueberries are sometimes used.

A woman in Boulder is facing a $1,000 fine for dyeing her poodle pink to raise awareness of breast cancer. She says she used beet juice and Kool-Aid to color the fur.

The laws on this matter vary from state to state. The Michigan State University College of Law has an Animal Legal & Historical Center, that allows you to search by state and subject for specific laws regarding animals.

Personally, I love Joey for his dogness: his padded paws, his plumey tail and floppy ears. I love to see how hidden he can get in the dappled shadows around the front bushes. I love the buff color of his fur, which turns golden in some lights. I love the shadow of a darker colored stripe that runs down his back, some days zigging and zagging, other days fanned out so subtly as to be nearly invisible.