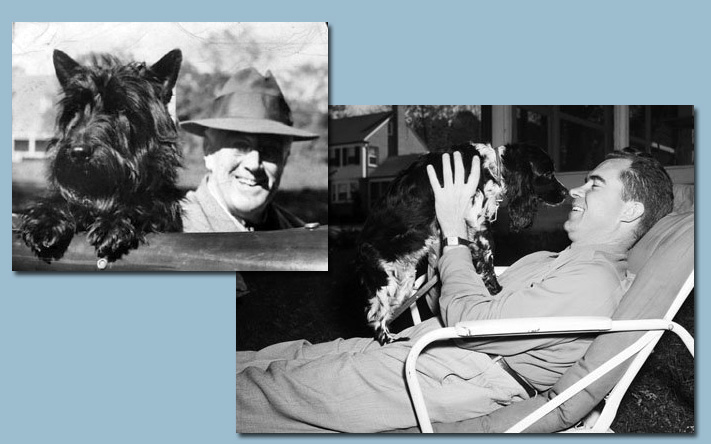 Two beloved dogs — Franklin Roosevelt’s Fala and Richard Nixon’s Checkers — inspired speeches that brought their owners back from the brink of political defeat.

It’s only fitting that today on Presidents Day, we take a look back through history at the contributions of these two dogs.

Fala, a black Scottish terrier, not only held the affection of Roosevelt, he capture the attention of the public, was covered by the media and received so many letters from people and animals across the U.S. he was given his own secretary. He was Roosevelt’s constant companion. (The Secret Service nicknamed him “the informer,” because his presence was a tip off that Roosevelt was near.)

He became the focus of controversy, however, when a rumor started that Roosevelt had accidentally left Fala behind on the Aleutian Islands during a tour and had sent a U.S. Navy destroyer at taxpayer expense to bring him back.

Roosevelt was facing a tight battle for his fourth term with strong opposition from the media. At a dinner speech before leaders of the International Teamsters Union in September 1944, Roosevelt fought back. After addressing labor issues and the war early in the speech, Roosevelt said:

“These Republican leaders have not been content with attacks on me, or my wife, or on my sons.  No, not content with that, they now include my little dog, Fala.  Well, of course, I don’t resent attacks, and my family don’t resent attacks, but Fala does resent them.  You know, Fala is Scotch, and being a Scottie, as soon as he learned that the Republic fiction writers in Congress and out had concocted a story I’d left him behind on an Aleutian island and had sent a destroyer back to find him, — at a cost to the taxpayers of two or three, or eight or 20 million dollars — his Scotch soul was furious.  He has not been the same dog since.”

The creative mind behind these words was actor Orson Welles, who had ad-libbed the Fala joke for the president before the final version was written.

According to historian Doris Kearns Goodwin, “The audience went wild, laughing and cheering and calling for more.  and the laughter carried beyond the banquet hall; it reverberated in living rooms and kitchens throughout the country, where people were listening to the speech on their radios.  The Fala bit was so funny, one reporter wrote, that ‘even the stoniest of Republican faces cracked a smile.'”

The speech defused the criticism that Roosevelt was wasting tax dollars, humanized an aristocratic president and helped him win an unprecedented fourth term in office. Roosevelt died just seven months after the speech.  When Fala died in 1952, he was buried near his beloved master.

Fast forward eight years to the day later. California Senator Richard Nixon was in danger of losing his place as the Republican vice presidential candidate in the 1952 election. Rumors were flying that he was making personal use of a fund set up by supporters to reimburse him for political expenses.

In a half-hour television address, he defended himself citing his modest background; years of public service and itemizing his family’s finances.

“That’s what we have and that’s what we owe,” he told viewers. “It isn’t very much but Pat and I have the satisfaction that every dime that we’ve got is honestly ours.  I should say this — that Pat doesn’t have a mink coat.  But she does have a respectable Republican cloth coat.  And I always tell her that she’d look good in anything.”

Then he added, “One other thing I probably should tell you because if we don’t they’ll probably be saying this about me too, we did get something — a gift — after the election.  A man down in Texas heard Pat on the radio mention the fact that our two youngsters would like to have a dog.  And, believe it or not, the day before we left on this campaign trip, we got a message from Union Station in Baltimore saying they had a package for us.  We went down to get it.  You know what it was?

“It was a little cocker spaniel dog in a crate that he’d sent all the way from Texas.  Black and white spotted.  And our little girl — Tricia, the six year-old — named it Checkers.  And you know, the kids, like all kids, love the dog and I just want to say this right now, that regardless of what they say about it, we’re gonna keep it.”

More than 60 million Americans watched or listened to the speech, which had the largest television audience up to that point.

Nixon stayed on the ticket and he and presidential candidate Dwight Eisenhower swept to victory the following November.

Checkers lived until 1964. Photographs of Nixon with Checkers make it clear that while the dog may have been Tricia’s and Julie’s, he gave great joy to the man who would become the nation’s 37th president.