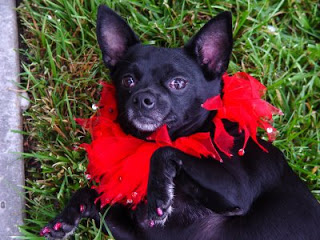 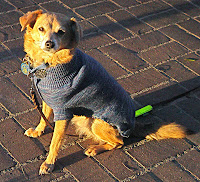 If dogs were really meant to dress, there’d be a store called “Bloomingdog’s.”

But there’s no denying that some days are cold, even in California, and a small dog needs an extra layer.

The first time I tried to put a coat on Joey, he froze and wouldn’t walk. It was like a horse blanket made of stiff fabric. I decided it was hopeless.

Dressing up your dog in knits

Then I got into knitting. What better project than a dog sweater? It’s small; it’s fun and doesn’t take a lot of time. You don’t need a lot of yarn but there’s still enough challenges to keep it interesting. 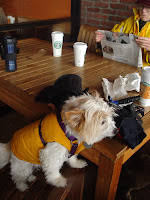 Even so, I was a little wary of going to all that trouble only to have another bout of clothing paralysis. I decided to buy a cheap sweater and see if the flexibility of 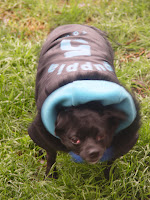 the knit would make him happier.

I found a simple shaded blue knit sweater that harmonized nicely with Joey’s blue collar. It cost less than $10. If it didn’t work, my bank account hadn’t been ransomed.

I got it on him will relatively little fuss. He moved happily in it, so we went out walking.

The first telephone pole he saw, he lifted his leg. A few moments later, the urine trickled out his left sleeve. Apparently, he had a girl dog sweater. They squat. Joey lifts and leans. Since the sweater was a long tube with sleeves on one end, it funneled waste products.

I spent a challenging hour or so altering the sweater so that it had a U-shape opening on its underside.

Missy is the ultimate. Every day, she wears painted toenails and a matching scarf. She’s even trained to lay on her back with her feet in the air until her polish dries. She’s the black Chihuahua shown in her rain gear — and with her red scarf and toenails.

Make a project out of dressing up your dog and knit a dog sweater.