The hotter it gets, the more I worry about fleas. At 70 to 90 degrees, fleas hatch and dogs suffer.

When you have a dog who is generally itchy, scratchy and licky, fleas make life so much more complicated. Fleas are the most common cause of itchiness in a dog. Vets will zoom in on flea control first. Visit after visit last year, I debated with Spike’s vet what to do about his constant paw-licking, rump-chewing and scratching. I was leaning heavily toward allergy testing.

Our vet focused on flea control. We would turn Spike over and, sure enough, a flea or two could be seen. She pointed out that even if Spike had allergies, we’d still have to deal with the fleas. 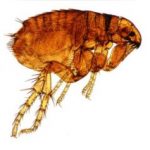 But how? Spike is only outdoors for his daily walks. Fleas can jump up to seven inches vertically and up to 13 inches horizontally.  Spike’s legs are only five inches long. The Frontline I’d always used seemed to be doing nothing.

Here is what his vet recommended:

The vet gave me one tip that was new to me: calling in Fleabusters or applying the Fleabusters powder myself. The powder is a white, nontoxic boric acid and salts mixture.  It destroys the outer shells of fleas, cockroaches, termites, silverfish and other insects. Less toxic than salt, the powder can be handled safely with bare hands. You sprinkle it over floors and sweep it into cracks or carpet pile with a broom. Rub it on  couch cushions and into upholstery crevices as well. A three-pound canister costs about $30 on Amazon.com and will treat about five rooms. Before going on a two-week road trip in October, I spent an afternoon applying the powder. The next day, we left and the powder sat undisturbed until we returned.

Fleabusters was a lot of work, but it lasts a year. Spike did seem to scratch less when we came back, although he still licked his paws. Was it the Fleabusters? The change of environment from Los Angeles to Yellowstone and all points in between? The change of season? I suspect it was all of those factors

Now we’re into a new hot season. I need to go back to the drawing board to develop a strategy for this year’s flea war.