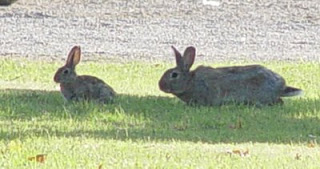 The first rabbit – white with black ears – was hopping around the edges of Sylmar Avenue. Red lunged to the end of his leash barking hysterically. 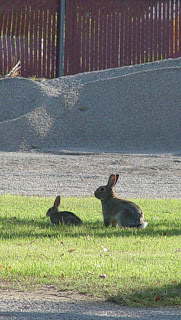 Joey caught the scent and reared up on his hind legs gargling as he struggled to bark against a tight martingale collar.
The second two rabbits were brown. They were grazing in the maintenance yard of Sherman Oaks-Van Nuys Park. I could see them plainly. They froze while the dogs wandered on down the asphalt path sniffing the bushes.

The squirrel was busy digging between two trees. Red jetted toward it, burning the distance between them. The squirrel headed for one tree, realized he wasn’t going to make it up the trunk with Red behind him and diverted to another. Red all but climbed up behind it.

A dog’s prey instinct is fascinating to watch when it gets triggered. Wikipedia describes prey instinct as “the instinctive behavior of a carnivore to pursue and capture prey.” Some people talk about the “play and prey drive,” because when puppies and wolf cubs play, they are pretend hunting.

The drive to chase, catch and kill is instinctive to all dogs. It’s why dogs race after balls or toys, play tug-of-war or shake stuffed toys when they play.

The prey instinct follows a series of steps:

People have long used this instinct for their own ends. Dogs used in herding are engaging in a modified form of hunting. Drug or other types of detection dogs are engaged in the search part of the cycle. Search and rescue training relies on a dog’s prey instinct.

Activities like flyball, agility courses, lure coursing – even a simple fetch – are examples of the prey instinct in action.

But what works in the wild isn’t always so great in the city. In natural habitats, dogs chase wild critters that are racing to escape them. Their instincts don’t see the finer differences between that and a runner, skateboarder, cyclist, car or playing children.

If you think you may have become an “animal of interest” to a dog, stop and stay still. What doesn’t move, make noise or act up is boring to a dog. According to Karen Park, a dog trainer and activist, “The average person cannot outrun or out-ride the average dog and should not even try. Chances are a chase will be triggered and the human or dog could get injured.”

As an owner, it’s my responsibility to be scanning the environment to check for things that might trigger Joey’s prey instincts. He’s definitely not keen on small children, although so far, he’s only been a barker, not a biter.

I’ve taken him to obedience school and being able to give him certain commands at critical points helps bring his attention to me and away from potential prey. I use a relatively short leather leash. We have a retractable leash, but I only use it when I’m training Joey or hiking. The retractable leash just doesn’t allow good control.

What is amusing to watch in some contexts can become tragic in others. A dog isn’t a small human in a fur coat. You have to apply Zen mind to a dog’s essential dogness and manage both behavior and environment to avoid problems.

Does your dog have good table manners?