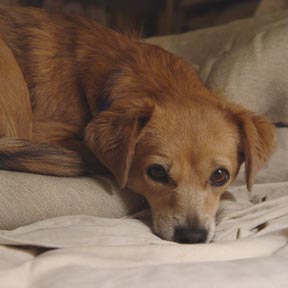 It’s late on a December afternoon. The light is draining from my bedroom leaving behind a chilly blue shadow. A nap is in order.

Fido loves naps.  He spends most of his day perfecting the art. He’s even willing to share the bed with me if I decide to nap too.

But Fido is not a cuddler. I certainly don’t want a lap dog, but once in awhile it would be nice to have a dog who leaned against me while he napped . . . maybe shared a little body heat. I have fantasies about dogs like that.  That’s not the real Fido no matter what I want.

I believe that in that critical socialization period between three and 12 weeks of age, Fido was robbed of learning trust and fearlessness. He’s much better than he used to be.  He now greets people with his tail up and ready to wag. He clearly trusts and is bonded to me. If I hand off his leash to a friend and race back upstairs to get something I’ve forgotten — dog treats, extra poop bags, a scarf — Fido is straining at the leash to follow me and adamant about not leaving the spot where he last saw me.

Nap time requires caution and finesse. Fido reads me like a book.  He jumps up on the bed and steps into the middle of his tan, plush doughnut bed, turns his three circles and then drops and places his muzzle on the wall of the bed facing the door where the monsters will most likely come from.

I carefully move my pillow so it is on the top side of Fido’s bed but not touching it. I slowly climb under the covers pulling them around me without causing any tension or movement under Fido’s bed. If that  happens, he stands up in a huff and plops down at the foot of the bed or on the floor with his muzzle on his front paws and sighs loudly.

If I’m lucky, I can curl around his nest with enough covers over me to keep the draft off my spine. Then I slowly tuck my hand between his body and the sides of the bed. If it’s chilly enough and he’s tired enough, he stays put.

I tell myself that I’m keeping the cold air off him in the gap between his curled body and the bed. I tell myself I’m spreading my warm hands over his arthritic shoulders like a human heating pad. I tell myself it’s a Proustian “recherche du temps perdu” in the puppy pile.

Mostly, I hope he won’t reject the touch.  I used to visualize energy flowing from my hand into his shoulders. Whether there really was an energy flow between us or my muscles simply tensed with the image, it usually made him move away.

These days, I try to keep my mind in a neutral or receiving state. I follow the slight rise and fall of his breathing. I close my eyes and feel safe. I feel the softness of his mane fur. I focus on him and me. My fingers start to lose sensation. It’s no longer clear what’s him and what’s me.

We breathe, and then we sleep.