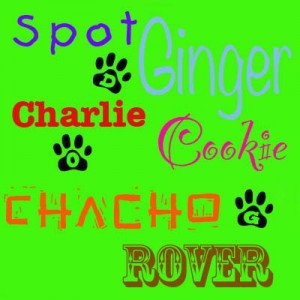 Now that friends are as likely to show off photos of their “fur babies” as they are their children, dog names have taken a human turn.

Gone are names like Spot, Rover, Nipper or Brownie. There are so many Maxes, Bellas, Charlies and Sammies, you can’t tell if it’s a two-foot or a four-foot being called at the dog park.

How we name our dogs says much about how they fit into our lives.

According to Barkbox, the top most popular dog names (based on its subscription list) are Bella, Charlie, Luna, Lucy and Max. But according to SEM Rush, as reported by Cosmopolitan.com, you’ll find the top 224 dog names in the U.S.

Other lists done by the Good Housekeeping and Vetstreet show similar results.

Dog names for the ages

Dog names have become a rich area for study by historians and sociologists. Even in the Middle Ages (roughly 400 to 1400 CE), according to Kathleen Walker-Meikle, author of Medieval Pets, people named their dogs — sometimes even human names like Jakke and Parceval.

More often, medieval dogs were named for characteristics — Blawnche, Nosewise, Smulfeste, Bragge or Holdfast. Other dog names were ones unlikely to be given to a person except as a nickname: Zaphyro, Zalbot, Mopsus and Mopsulus.

George Washington was a dog-lover and breeder. He gave his favorite dogs names like Sweetlips, Scentwell, Vulcan, Drunkard, Taster, Tipler and Tipsy. Abraham Lincoln had several dogs. The most famous was Fido, who was murdered within a year after Lincoln. Fido is a Latin word meaning “I obey.” It honors the loyalty dogs show their human families.

The Hartsdale Pet Cemetery outside of New York City is a treasure trove of insights into the human animal bond. Established in 1896, it is America’s original pet cemetery.

Anthropology professor Stanley Brandes of the University of California at Berkeley published a study in 2009 of pet naming trends based on the gravestones at Hartsdale. Some of the earliest stones, he discovered, never listed the pet’s name. Sometimes the owner’s family name was listed or simply “Pets” or “My Pet.”

Up until World War II, most pets interred there had names such as Brownie, Laddie, Hobo, Rags, Dicksie, Snap and Pippy, Brandes reported. In the 1960s, dog names gradually included more human names. Not only that, the names began to reflect the dog’s gender. Meet Ginny and Daniel and their friends Cha Cha Man and Candy Girl.

By 1985, when New York Times columnist William Safire asked readers to send him stories about how they named their dogs, the use of human names for dogs was solidly in place. (Safire sent the original 410 letters he’d received to Brandes in 1988. Brandes reported on the contents in an article, “Dear Rin Tin Tin: An Analysis of William Safire’s Dog-Naming Survey from 1985,” published in the March 2012 issue of Names.

So how did you name your dog? Here’s some dos and don’ts for naming your dog.