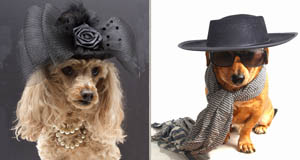 FidoUniverse is honored to present to you our new dog fashionistas, Vera Woof and Pierre Curden.  Every Friday is Fashion Friday here at Fido Universe. Vera and Pierre will give you their insider perspectives on what sophisticated dogs are wearing around LA.

In case you think that dog fashion is just frou fra, consider this: in 2019, for Halloween alone, American consumers spent $490 million on pet costumes! That doesn’t include Christmas duds, collars, leashes or sweaters for chilly day walks.

There are so many options — and so many ways for a dog to get it wrong. So meet our experts:

Vera Woof has been in love with fashion from her first rhinestone pave pink leatherette collar.

“I just jumped fours paws on the velvet from that moment forward,” she said.  “The benefit of being involved in fashion from such an early age is that I’ve had time to mature. I’ve given up glitter for glow.”

Pierre Curden also was smitten by fashion early on.

“My owner was obsessed with balls and frisbees,” he said. “I couldn’t see the point myself. I mean, if he wanted the ball, why didn’t he just hang on to it in the first place? But his flying objects turned into bargaining chips that launched me in fashion.”

Pierre hid the balls and frisbees instead of fetching them. He then traded them to neighborhood Golden Retrievers and Labs for their groomers’ neck kerchiefs.

“At one point, I had the largest collection of neck kerchiefs in the neighborhood. They were straight out of the factory, poly blends with the designs printed rather than woven into the fabric.  Even so, it was enough to spark my imagination. All the bitches in the neighborhood came to me to learn how to tie and wear theirs.”

Both Vera and Pierre agree that it’s not what a dog spends on his wardrobe that gives him — or her — an unforgettable style.

“Totally,” Pierre agreed. “Natural dogs are beautiful.  The wrong clothes and accessories are just demeaning. A Great Dane in ruffles and frills is appalling. A Scotty in a classically tailored, belted, wool tartan coat is smashing.”

Too many dog lovers think style only in the context of special occasion dressing such as Halloween or other holidays.

“Style should be a way of life,” Vera said. “It should be visible in your collar, your leash, your bed — your every day universe.”