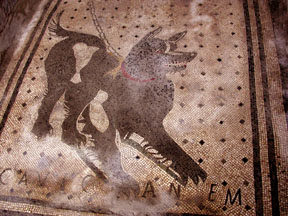 The dog days of summer have trotted in, circled three times, and plopped down for a spell.

If this were Ancient Rome, some wonderful red dog would have given its life in April to tame the heat, irritation and pestilence of the dog days (dies caniculares).

Ancient people called this period the “dog days” because Sirius the Dog Star rose just before or with the sun during this period. (Sirius is the nose of the Canis Major [Big Dog] constellation.)

These days, due to the slight wobble in the earth’s polar axis, astronomy and meteorology don’t coincide so neatly. When the dog days begin varies depending on whom you talk to. The ancient Romans said the dog days ran from July 24 to Aug. 24. The Old Farmer’s Almanac says they run 40 days from July 3 to Aug. 11.

They are considered to be the hottest days of summer with the least amount of rain. The ancients believed them to be an evil time when “the Sea boiled, the Wine turned sour, Dogs grew mad, and all other creatures became languid; causing to man, among other diseases, burning fevers, hysterics, and phrensies.” according to Brady’s Clavis Calendaria, 1813. In ancient Egypt, the dog days began just before the annual flooding of the Nile. Many ancient cultures associate the appearance of Sirius in the dawn sky with epidemics.

David Dickenson of Universe Today has a wonderful post about “The Astronomy of the Dog Days of Summer” if you’d like to learn more.