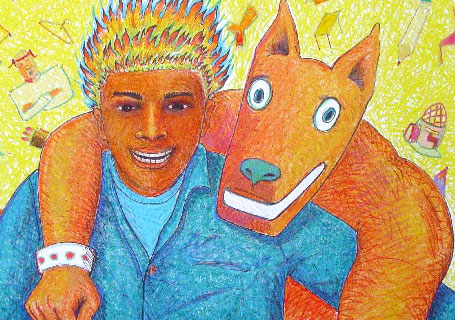 You won’t see many dogs on the LA Metro subway system, but that doesn’t mean you won’t find some great dog art.

Take the Hollywood and Vine Red Line Station, for example, Once you’ve ooo’d and ahhhh’d over the film reels attached to the walls and ceiling of the platform, stopped for an up-close look at a movie camera and admired the movie screen and curtain motif at each end of the station as you go upward to the next level, you’ll see the dog art.

Along the corridors and escalators leading to street level are whimsical tiles celebrating Hollywood by the late ceramic artist Gilbert “Magu” Lujan. Throughout are images of his characteristic anthropomorphic dogs.

Magu was an influential Chicano sculptor, muralist and painter. He was commissioned as a design principal for the Hollywood & Vine station in 1990