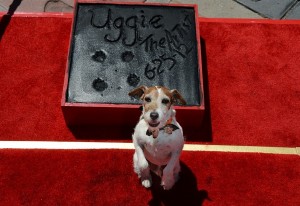 Uggie, the scene-stealing Jack Russell from the hit silent film “The Artist,” has become the first dog to get his paws printed in the forecourt of Grauman’s Chinese Theatre.

No limo for Uggie.  He arrived on a red fire engine with owner and trainer Omar Von Muller.

The occasion also marked Von Muller’s announcement that Uggie will be retiring from entertainment. Best known for his role in “The Artist,” Uggie also appeared in “Water for Elephants” and “Mr. Fix It.” He was the winner of the Palm Dog Award at the 2011 Cannes Film Festival.

Although there was a ground swell of support for giving Uggie recognition at the Academy Awards, little more than publicity came of it.  Legend has it there was precedent for such a thing: At the first Academy Awards in 1929, Rin Tin Tin reportedly gained the most votes for Best Actor.  Emil Jannings actually received the award that evening for two roles in “The Way of All Flesh” and “The Last Command.”

Rejected by at least two previous owners for being too much to handle, Uggie was discovered by Von Muller at a dog pound.  Von Muller initially planned only to foster him.  He later decided to keep him because of his intelligence, fearlessness and willingness to work.

Uggie will be retiring to the North Hollywood home where he lives with Von Muller. Von Muller’s wife, their six-year-old daughter and seven other dogs, all working in the industry.