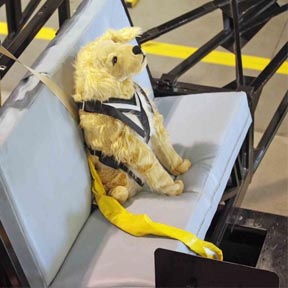 When I’m setting out for a drive with Fido in the car, guilt climbs into the passenger seat beside me.

Guilt because Fido is riding around unrestrained in the back seat where he could easily go flying and get hurt if I brake suddenly or we (God forbid!) get into an accident.

It isn’t perfect and we’ll tell you why — and it doesn’t hold a candle against some of the restraints that have undergone the most strict testing recently.

Why your dog needs restraints in the car

The potential dangers of having a dog loose in a car while you are driving are so serious that some states are considering new laws and penalties similar to those for texting while driving or driving under the influence.

Here’s some video from the harness testing we’ll describe below.  It’s a terrifying look at what could happen to your dog in a car without good restraints.

Safety restraints for dogs take several forms. But they don’t protected equally well. In most cases, they can protect against certain types of dangers, but not all. Here are the main categories:

Until last October, your only option was to rely on the manufacturers’ claims — without having much information about how they did their testing.

The crash testing required MGA to build specially designed, life-like dog models. The models were based on a 25-pound terrier, a 45-pound border collie and a 75-pound golden retriever.

The testing identified the Sleepypod Clickit Utility harness as the 2013 Top Performing Harness.  The Center for Pet Safety noted that this product was the only that kept the dog from launching off the car seat, reduced rotation of the dog during the test crash and offered a three-point connection.  The harness also has elements that help absorb energy froma crash and reduce the forces on the dog.

Here’s video of the harness during testing:

The Clickit harness can be used as a walking harness as well as a car harness.  It has a padded chest section that attaches at the back of the neck and the shoulders.  It comes in four sizes, three colors and costs $90 to $100, depending on the size of the dog.

Disclosure: FidoUniverse received no products, incentives, payments or other consideration from any of the makers or sellers discussed in this post.