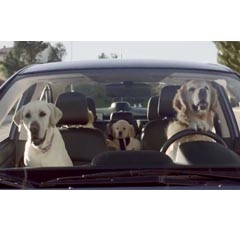 Fido and I had seen the “Dog tested. Dog approved” sign in our local Subaru dealer’s window when were out dog walking.  But it didn’t land with much weight until we discovered the car maker’s involvement with the Center for Pet Safety in testing car restraints for dogs.

This impressed us. Word on the web is that Subaru may start selling in their online store the type of restraints that worked best in the test.

Way to a customer’s heart is through her dog

Recently we’ve become completely entranced with the latest of Subaru’s television ads featuring the Barkleys, a family of golden retrievers: Auggie, 4; Stevie, 4, who was rescued from a Pasadena animal shelter; Sadie, six months; and Sebastian, the baby at three-months. Sadie and Sebastian come from a Moorpark dog breeder.

The campaign is designed by the ad agency Carmichael Lynch with the production company Skunk. Here are some of our favorites:

Or this one that any parent of a teenager can relate to:

There are so many episodes in this wonderful campaign that we can’t show more.  But these are all worth looking at:

According to Richard Feloni, a writer for BusinessInsider, “The car manufacturer didn’t just make a series of silly ads with dogs driving just because if felt like they would appeal to the internet crowd.  Subaru is a leading advocate for pet safety in cars, and it partnered with the Center for Pet Safety last year to determine the best way to protect pups traveling with their owners.  Their goals is to discover the most effective kind of dog restraint, since none on the market withstood significant collision tests.”

These ads are entertaining, but not high on substance about dog-related safety, features or benefits.  But given the support that Subaru has given to safety testing car restraints, we’re willing to keep an eye on their progress.  We also were pleased to discover that one of the dog stars in the Barkley family was rescued from local animal shelter.  We like that a lot.