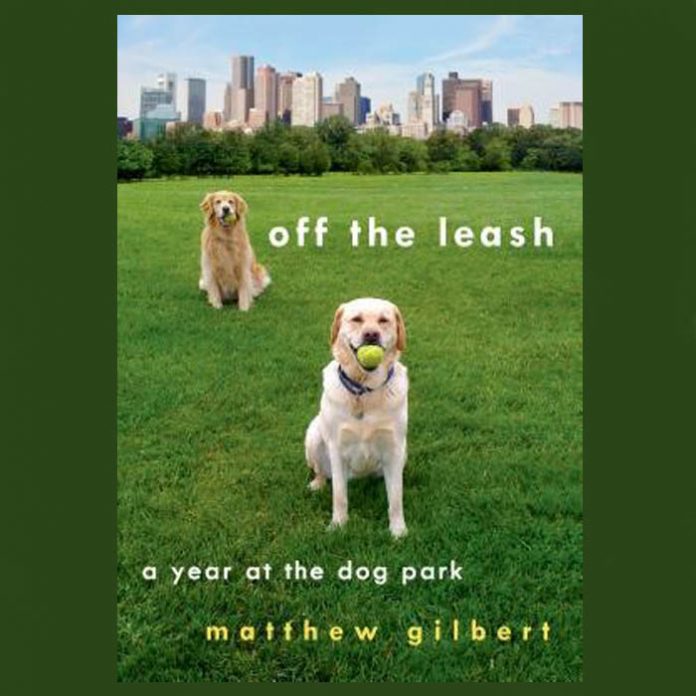 Off the Leash: A Year at the Dog Park will make you swear author Matthew Gilbert
hangs out at your dog park.

TV critic for the Boston Globe, Gilbert liked his relationships at arm’s length and behind a screen. But marriage to husband Tom, a dog lover, and getting Toby, a yellow lab puppy, opened up his life. It nudged him into the off-leash area of Amory Park with its subculture of eccentrics, rebels, babblers and big-hearted people and their engaging dogs.

Just like jury duty or Kaiser health education classes, dog parks throw us among people we never would have come close to in our regular lives.

Discovering the world of dog parks

Gilbert, fresh from sessions with a rigorous trainer, arrived at the dog park with Toby filled with visions of owning the perfect dog. Toby refused to sit while he took off the leash. He self-consciously doused his hands with Purell after picking up poop. His awkward ball-throwing earned him the nickname “Big Bird” from other dog owners.

Early on, he met a man wearing a cowboy hat with “a hint of patchouli in the air around him, mixed with eau de fall mud and the smoke from his Camel Light.” The man’s dog is a stiff, 14-year-old, Lab-ridgeback mix named Maya. With no introduction, the stranger tells Gilbert about his messy divorce, move to a studio apartment and the saving grace of having Maya.

Talking to another park regular, Margo, with her flaming red hair and dangling ball chucker, Gilbert mentions the singer Madonna. Margo, as oblivious to pop culture as Gilbert is steeped in it, thinks he’s talking about Jesus’ mother.

“Walking the Amory periphery, I began to feel like an early-twentieth-century psychiatrist touring a grassy sanatorium in the midst of making a variety of diagnoses. Strange behavior seemed to spill out whenever I ran into someone at the park,” Gilbert write.

Whatever comfort zone Gilbert might have wanted was shattered by Toby’s enthusiasm for the other dogs: Stewie, a Burnese mountain dog; Chester, a ridgeback mix; and Bertha, a golden retriever. While the older dogs tutor Toby in dog graces and manners, the owners connect and build relationships.

Over time, Gilbert’s early judgments shift as well. Drew, a buff player who is always getting into or leaving relationships with women, is heart-broken when his dog Chester suddenly dies.

Cell Phone Lady, as Gilbert thinks of her, seems to ignore her two Westies while she talks on her phone. Then he learns that she manages a halfway home for intellectually challenged youths nearby and comes to the park during her lunch for a few minutes of respite. Her calls are from the counselors at the house about issues that arise in her absence.

He meets Lucinda, owner of Nellie the Great Dane, who lost her young daughter to cancer a few years earlier.  Her dog park buddies rallied around her, walking her dog, bringing food and comfort as needed.

“This book isn’t about an instant life transformation thanks to a dog so much as it’s about those great daily tugs of the leash, how visits to a place can accumulate into an adventure . . .” Gilbert writes. “It’s a portrait of savoring ordinary life. Ultimately, I would let go of Toby’s leash at the park, and I’d let go.”

The year in the dog park

Over the year, inevitable losses occurred. Hayley and Stewie, the Bernese mountain dog, leave Boston. Drew’s Chester dies suddenly at age eight. Bertha is diagnosed with untreatable cancer. Reminders of what all dog lovers know, the final good-bye is inescapable.

But, Gilbert writes, “You have to force yourself to trade feelings of dread for the energy of the present tense, the panting dog who you can so easily make so intensely happy.”

For Gilbert, whose father had died when he was three and who had resisted attachments because the threat of loss loomed so large, that was a life-changing lesson.