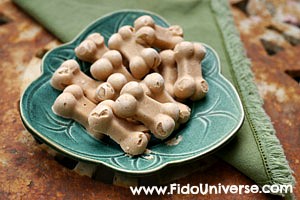 Frozen treats are a great way to cool a dog down when summer temps soar.

One of the easiest frozen treats to make for your dog are popsicles. Just take homemade or store bought broth (without onions, please) and freeze it in paper muffin cups, ice cube trays or mini waxed cups. When solid, you can put them in plastic bags to store in the freezer and dole them out to keep Fido cool. Depending on your dog’s tastes, you could use tomato juice, carrot juice or diluted apple juice.

Another summer standard are frozen peanut butter and yogurt treats. One recipe floating around the internet calls for low-fat vanilla yogurt and peanut butter. We’ve given that recipe a healthy twist by adding cinnamon or turmeric.

The recipe below starts with a base of low-fat Greek yogurt, natural peanut butter and little bit of molasses. When that has been well mixed, we divide in half to make one variation with cinnamon and one with turmeric. 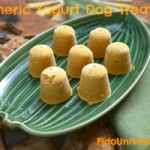 Soften the peanut butter in the microwave. Pour the yogurt into the bowl of a mixer. Add the peanut butter and molasses.  Mix well. Divide the mixture into two bowls. (It will be a tad over two-and-three-quarters cups each. Don’t obsess; this isn’t Cordon Bleu cooking.)

Cinnamon comes from the bark of a small tree that grows in parts of Asia, Indonesia, Brazil and Egypt. What you find most often in grocery stores is Cassia cinnamon, which is darker and more bitter than Ceylon cinnamon, which is sweeter — and more expensive.

Many health claims are made for cinnamon including helping to regulate blood sugar and fighting infections caused by fungi (such as Candida albicans or yeast) or bacterial (such as E. coli). Other health claims are that it is an anti-inflammatory and can help dogs that have arthritis, lowers blood pressure and lowers LDL cholesterol. A lot more research needs to be done to prove that any of these claims are true. But centuries of cooks, bakers and enthusiastic eaters have shown that it isn’t dangerous — taken in small quantities. If you have any doubts, you should consult your veterinarian.

Add one tablespoon of cinnamon to half of the yogurt and peanut butter mixture.  Blend well. To freeze the mixture, you can pour it into paper muffin cups, an ice cube tray or a silicone dog bone or dog paw biscuit baking form put on a metal baking sheet. The baking sheet keeps the silicone form level; the silicone form makes it easy to punch the frozen treats out.  Freeze until the treats are solid. Put the treats in a plastic bag in the freezer to keep ready for giving to your dog whenever the heat gets to him.

Turmeric is an orange yellow herb that comes from the ginger family. It gives mustard, curry and some Thai recipes their golden yellow color. Turmeric contains curcumin, which is an antioxidant that helps reduces inflammation. Turmeric and curcumin are being studied by scientists, but as with cinnamon while there hints of benefits, nothing has been proven.  Again, centuries of human consumption show that when used in cooking, it’s not harmful.

Again, if you have any doubts, consult your vet.

This yogurt and peanut butter treat is another winner for dogs in the summer.