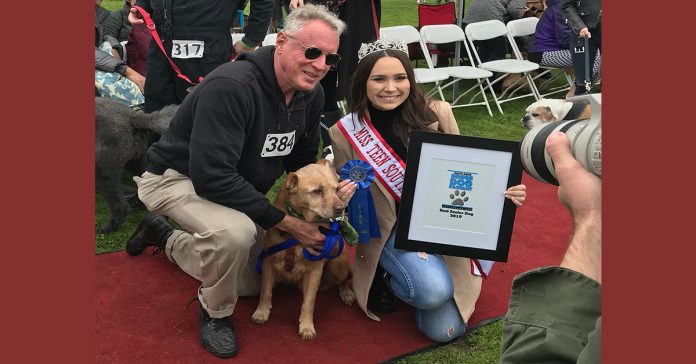 I will never have a dog that competes in the Westminster dog show. But I sure had fun watching my buddy, 13-year-old Red, strut down the red carpet at the Haute Dogs Competition in February.

I’ve known Red since he was a cheeky teen.  I’ve trained him to spin and to leave a treat untouched until I give him permission. I’ve walked with him and his Prime Person all over the neighborhood. I’ve ridden the kiddie train at Griffith Park with him and my beloved Joey — back in the day before insurance companies stopped such fun. I’ve kept his scrapbook, been his paparazza and celebrated his joie du chien.

At 13, Red wears his age well.  A Jindo-mix, his coat is a red worthy of Dublin. These days his head is more white than red. Hematomas have bent his once perky ears. He doesn’t hear so well, so the UPS man and the mailman get breaks.

But he’s a proud dog, nowhere near ready to join the AARD (American Association of Retired Dogs).

Even so, when I signed him up to compete in the HauteDog.org Best Senior Dog competition, I expected nothing more than a fun day.

But first, let’s talk about Hautedog.org. This nonprofit was created by Justin Rudd in 2001. Its mission is to help the pubic better understand and appreciate dogs, encourage owners to be more responsible and to foster adoptions and rescues.

Thanks to Justin Rudd, dogs and their people can enjoy one off-leash dog beach on L.A. County’s 75-mile coastline — instead of none.

The competitions included Best Dog with a Disability, Best Junior Handler, Best Senior Dog (seven years or older), Best Young Dog (16 weeks to a year old), the National Mutt Contest as well as contests to decide which dog was most handsome, prettiest, wearing the best outfit or had the best smile, legs, ears, butt or tail. There were also several contests for bulldogs (Rudd loves and owns bulldogs), including the National (English) Bulldog Beauty Contest and the French Bulldog Beauty Contest.

Prizes were gift baskets, framed winners’ certificates, blue ribbons and “bragging rights for a year.” Prizes were supplied by Zignature Food for Dogs, which gave a years’ supply of food to the winner of the Bulldog Beauty Contest; Red Barn Pet Products and Grandma Lucy’s.

Red, being the savvy dog-about-town that he is, took his win with poise. I’ll create a new spread in his scrapbook. His owners will hang up his framed certificate and blue satin first place ribbon.

HauteDogs.org sponsors a number of events throughout the year. These include beach clean-up events, Blessing of the Pets, a Howl’oween Parade and Operation Santa Paws to collect toys, treats and supplies for shelter and rescue dogs.

5 Questions to Ask Before Take Your Dog to Work Day

Anniversary of the founding of the ASPCA