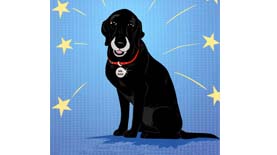 Maxwell Medallion-winner Denise Fleck tackles the prejudice against black dogs head on in her delightful children’s story, Don’t Judge a Book by its Cover.

Through charming illustrations by Lili Chin, we meet Mary-Alice and her friends. They are the cool girls with the cutest hairstyles and the sharpest eye for what’s in and what’s not. When Mary Alice is promised a dog for her birthday, she immediately envisions the fluffy puppy with the pink bow she saw in a pet store.

Fortunately, her parents have a different idea. They take her to the local animal shelter, where she gets a series of lessons on dogs and being responsible for them. In the end, once she’s looked deeper and taken a little time to know him, she falls in love with a five-year-old black Labrador named Rico.  She’s so impressed that she renames him “Mr. Rico.”

The story was inspired by Fleck’s own black Labrador, Rico. Fleck learned how to walk by holding on to her family’s Great Dane. She’s well-known in Los Angeles for her Pet First Aid and CPR classes and frequently interviewed on television and radio about pet safety. Since 2011, she has been teaching students in the Burbank Unified School District about animal care at the Burbank Animal Shelter, giving them a taste of a possible future career.

In the back of the book, Fleck offers more education about black dog syndrome. People avoid adopting black dogs because of superstition, stereotypes or merely because they don’t photograph as well as other colors of dogs on the internet. She also tackles the prejudice against older dogs and specific breeds of dogs.

She is the author of the pet care series‘ Pet Care Series and has written on pet first aid for the Animal Behavioral College’s textbooks for groomers, trainers and veterinary technicians. She has plans for sequels to Don’t Judge a Book by its cover.

The Maxwell Medallion is given by the Dog Writers of America in honor of Maxwell Ridell, a 35-year newsman who wrote a syndicated dog column for 30 years as well as writing for Dog World Magazine for 50 years, writing books and serving as an American Kennel Club judge.

This is Fleck’s second Maxwell Medallion. She also has been nominated for the Women in the Pet Industry Network’s Woman of the Year Award and was a finalist in its 2013 Solopreneur of the Year Award.

B is for black dog bias today in the 2014 A-to-Z Challenge for bloggers. Every day in April (except Sundays), participating bloggers will write a post for the appropriate letter of the alphabet. Come back tomorrow when C is for the cost of owning a dog.