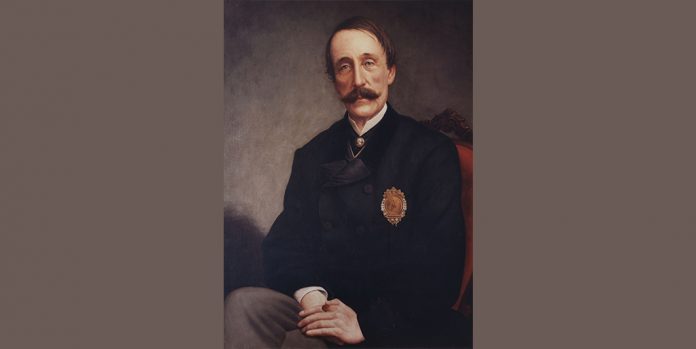 In Henry Bergh’s lifetime, dogs turned treadmills or pulled carts.  Sporting men put down money on $1,000 championship dogfights. Strays were rounded up from Manhattan streets, thrown into cages and swung into the East River to drown.

What was unusual was for a wealthy, socially prominent man to notice and say, “Enough!”

That man was Henry Bergh, the son and heir of a successful shipyard owner. His leadership led to the founding of the American Society for the Prevention of Cruelty to Animals (ASPCA) on April 10, 1866, by the New York State Legislature. Nine days later, an anticruelty law was passed and the ASPCA was given the right to enforce it.

Bergh was a gentleman, a dabbler in the arts and a European traveler. In 1862, President Abraham Lincoln appointed him secretary and acting vice-consul to the American legation in St. Petersburg, Russia. There, Bergh was horrified to see how peasant drivers beat their work horses.

He resigned in 1864 because of the severe climate.  Returning to New York, he stopped in London to visit the Earl of Harrowby, president of the Royal Society for the Prevention of Cruelty to Animals.  The RSPCA was founded in 1824 and given royal endorsement in 1840.

Back home, Bergh began to focus on the plight of animals in America. He gave an eloquent speech on Feb. 8, 1866, to an audience that included some of New York’s most powerful business and political leaders.

“This is a matter purely of conscience; it has no perplexing side issues.  It is a moral question in all its aspects,” Bergh told them. Dignitaries pushed forward to sign his “Declaration of the Rights of Animals.”

Fighting to end cruelty to animals

A legislative victory was’t enough for Bergh. With Indiana Jones-style, he visited slaughter houses and finagled his way into inspecting horses’ collars and saddles for sores.

He once dropped through a skylight into a dog fighting pit run by the infamous sportsman Kit Burns. Burns would starve his dogs for days and then set them against large gray wharf rats — or each other — surrounded by cheering, betting spectators. His son-in-law would bite the head off a live rat for a price.

Bergh lectured in schools and social clubs about the importance of preventing cruelty. In 1867, the ASPCA created the first ambulance for horses in the country. He invented a way to substitute artificial targets for live pigeons for sportsmen to shoot. Throughout Manhattan, Bergh set up water fountains for horses pulling carts and streetcars.

The ASPCA was so trusted that in 1894 it was put in charge of New York City’s animal control services. Until then,  the city’s dog catchers were corrupt.  The society held those responsibilities for more than 100 years before turning them back to the city.

Since its founding, the ASPCA has:

Cruelty to animals hasn’t been wiped out, but thanks to Bergh and the ASPCA, dogs and cats throughout America live longer, more safely and with protections under the law.