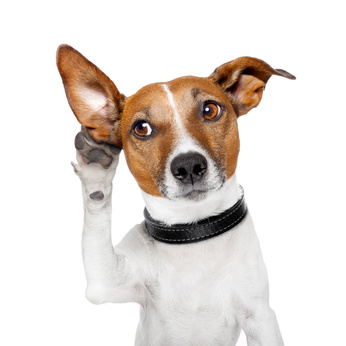 Fido and I have had two experiences with animal communicators. In one case, the communicator was hardly Dr. Doolittle; but what the other communicator told me had an uncanny fit with issues under discussion in our household.

The first held regular hours at a local pet shop. Fido paid no attention to her. He was searching for the dog biscuit aisle. She told me Fido was too polite to talk about his previous household and really liked the harness I’d bought him because it made him feel like he belonged to someone. Given that he had been rescued from a shelter only a few weeks earlier, this information fit . . . in a way . . . but it could have been said by or about any dog.

When we met with Lydia Hiby earlier this month, it was a different conversation entirely. The 15-minute long session was scheduled through a dog club we belong to.

Two things struck me when we walked in and met Lydia. The first was the warm, comforting energy that radiated from her. The second was her stunning, oceanic, blue green eyes. Fido, who is shy and nearly always aloof from new people, took up his Sphinx pose staring toward the door at the end of his leash with his back to Lydia and me. He gave no indication that anything was happening during our session.

Lydia asked only two questions: how old was Fido and how long had I had him. Without a pause, she started telling me what Fido was communicating:

My response: Fido definitely does not like children. He particularly hates little girls around eight or nine years old, For years he also hated balls, especially larger ones. He’s not a sociable dog and seems

My response: In late August, Fido’s vet had prescribed cosequin when I’d told her how many mornings he woke up walking stiffly and slowly. After nearly two months, the stiffness is gone. But I never mentioned this with Lydia or any of my dog club friends.

My response: I had also discussed this with Fido’s vet (but not with Lydia). The vet said that she thought it was partly age and partly a senior dog’s sense of entitlement to ignore what he didn’t care to obey.

My response initially was, “Come again?” I’ve never had a desire to keep birds, and Fido had only rarely shown any interest in birds. It took me several days of thinking to wonder if this was his response to conversations I’d had with a friend about whether I should get a second dog as Fido ages. Guess the answer to that is NO. But stated in a totally facing-saving way as only a dog would do.

Lydia asked if there were questions I wanted to ask and I raised the issue of a road trip I’m thinking about and whether Fido should come along or stay at home. According to Lydia, Fido has some concerns about riding in cars, but generally felt he’d rather go than stay.  But if he stayed at home, he’d prefer having someone come in to take care of him than to have to go somewhere like a kennel or a neighbor’s house.

One of the hardest things about understanding animal communication is that there is nothing physically to observe. Lydia, who has been a veterinary technician and worked as an animal communicator for more than 20 years, says on her website that she works by first “asking” the animal what he or she needs to “talk” about.

“This is done by my sending pictures to your pet about what you need to know,” she continues. “”The process continues by your animal companion sending me pictures, emotions and physical sensations. I feel these in my body and then make them into a dialog to give you the answers that you need.  When I do a body scan, I can give you valuable information you can take back to your veterinarian, chiropractor, farrier or trainer.”

I don’t know how this process works. I do know that I can sometimes finish other people’s sentences or know who is calling before I look at caller ID. I certainly believe that communication is more complex than just normal talking.

Did I find the process valuable? Yes, and I would consider doing it again. It was fascinating when things I never mentioned or even thought about came up in Lydia’s report — Fido’s joints feeling better, his hearing being bad or the bird issue. Could you invalidate these issues as interpretations I made after the fact. Of course.

One thing that Lydia can do is a consultation about when it may be time to put a dog to sleep. That could be a useful addition to the decision-making process.

Lydia has written a book called Conversations with Animals and does seminars to teach people to use techniques to communicate with animals or nonverbal people such as people who have had a stroke, are in a coma or are autistic.

Corgis on the Beach