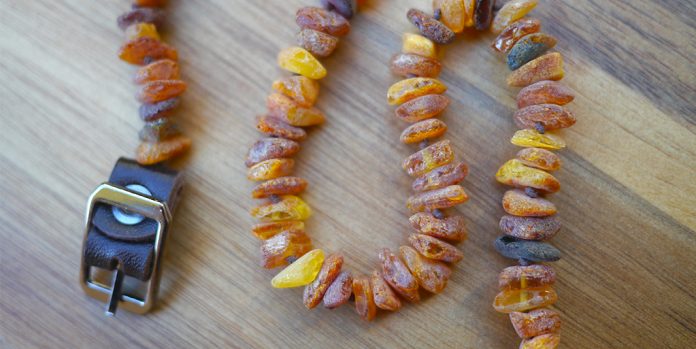 Spike looks debonair wearing his amber flea collar.  We got it at Healing TouchVets in Sherman Oaks. His vet there, Audra MacCorkle, DVM, wears an amber bracelet, as do many of her vet techs and patients.

Baltic amber collars are the latest “thing” in flea control. We aren’t talking about golden globs of transparent resin with insects trapped inside. We’re talking about small, irregular, milky gold and toast brown pebbles. The amber strung on cotton thread and attached to an adjustable leather strap and buckle. Reportedly, the longer the dog wears the collar, the better it works.

Amber is a petrified form of resin, a thick sticky substance that trees produce to protect themselves from insects and fungi after an injury. Some 44 million years ago pine forests along the Baltic Sea produced resin that turned into amber — an estimated 100,000 tons of it. Baltic amber has more succinic acid (about 8 percent) than other types of amber. (It is sometimes called succinite.) This supposedly is the healing element in amber.

How do amber flea collars work?

One theory behind the powers of amber flea collars is that resin has aromatic chemicals that are released when the amber is warmed by the dog’s fur. These chemicals repel fleas and ticks just as the resin repelled insects and fungi for the trees.

A second theory is that the friction of the amber beads rubbing against a dog’s fur creates static electricity that repels fleas. The ancient Greek Thales of Miletus was the first to discover that amber generates static electricity; the Greek word for amber is elektron. Later scientists used that name to coin the word “electricity.”

Yet another claim is that as amber rubs against the skin, succinic acid is absorbed and reduces inflammation. Mothers of teething babies swear by amber baby necklaces.

Generally, I’m not good about accepting claims on faith and testimonials. I want evidence-based proof. Even more so when it involves my dog, who can’t tell me what he’s experiencing. But I’m desperate to stop Spike’s itching and scratching. (The sound of his foot thumping the floor at the end of repeated, long scratches wakes up my downstairs neighbor in the early mornings.)

With Spike’s allergies and sensitive skin, I worry about systemic flea-killers like Frontline or Advantage. Last summer, neither seemed to have much effect.

The amber collar may be wishful thinking, but it didn’t cost much. They range from about $26 to $33 on Amazon.com depending on the size and the packaging. It doesn’t have side-effects or toxins. Amber collars are easy to care for: just dip it in warm water and rub it dry with a soft cloth. Don’t use soaps, detergents or harsh cleaning agents. Don’t put it in hot water or hot surfaces. They will last as long as the cotton thread that holds it together does.

For the first six weeks, it appeared to help. It certainly worked at least as well as the Frontline had last summer. Spike still scratched, but not so intensely. After the novelty of having it on him wore off, it didn’t seem to make an observable difference. Keep in mind that effective flea control involves keeping your dog’s environment free of fleas and their eggs as well.

Have you tried an amber collar for your dog? If so, we’d love to hear about your experience. Leave us a comment.